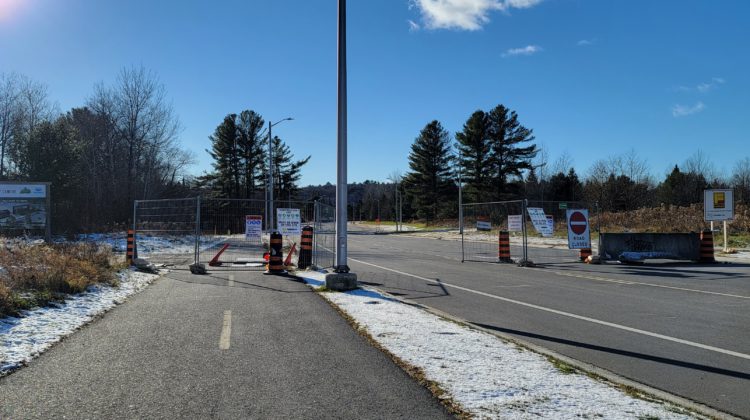 The entrance to Salmon Avenue, next to the Gagnon's Your Independent Grocer, where the future Muskoka Lumber Community Centre will be (Photo credit: Mathew Reisler)

Fowler Construction is increasing staffing at the Muskoka Lumber Community Centre to meet a mid-December goal to have site preparation work finished.

Cindy O’Regan, Director of Recreation for Town of Bracebridge, says they were slightly delayed by the rain in November. She says the site will shut down in December, with a return date set for the spring when the general contractor begins work on the building.

In December 2020, Aquicon Construction, Ball Construction, Fortis Construction Group, and Graham Construction were shortlisted by town staff as potential contractors who could undertake the project. O’Regan says the contractor hasn’t been chosen yet. “It’s quite a lengthy process,” she adds.

Once construction starts, it’s expected to be finished by fall 2023. The 126,680 square foot centre will have an arena, a new library, community auditorium, indoor multi-sport fieldhouse, common lobby, outdoor play spaces, trails, and 330 parking spaces. There is also room being retained for a possible second arena, which hinges on the future growth of the community. It will not be built as part of the initial construction of the community centre.

In July, Muskoka Lumber entered into a two-decade agreement with the Town of Bracebridge for the naming rights to the building. Other businesses entered separate agreements for other portions of the building in September.