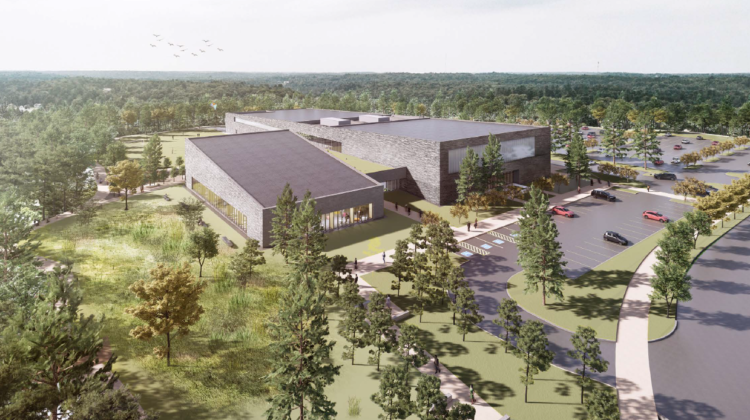 The province is investing $16 million into the construction of Bracebridge’s Multi-Use Community Centre.

The new funding will allow the construction of the Bracebridge Public Library and the multi-sport field house to move forward. Those two parts of the project had been pushed aside in late 2020 after the town failed to get funding from the federal and provincial governments. Premier Doug Ford was in Bracebridge Monday for the announcement. “Community centres are absolutely critical to every area of the province,” Ford said. He added that Bracebridge Mayor Graydon Smith has been a “champion” throughout the process, joking that he was calling every week to figure out what’s going on with the funding and if anything had changed.

Along with the library and multi-sport field, the community centre will also house a 1,000 seat single-pad arena and community hall. A playground, outdoor field, and 620-metre trail will also be created. The 20.8-acre property will have 330 parking spaces.

The funding from the province is coming from the Strategic Priorities Infrastructure Fund. This is on top of the $42.8 million that is being covered by the town of Bracebridge.

The funding announcement was made on the grounds of where the Multi-Use Community Centre will be on Salmon Avenue. Along with Ford and Smith, Parry-Sound Muskoka MPP Norm Miller and District of Muskoka Chair John Klinck were on-hand.

“We knew we had a great project,” Smith told the MyMuskokaNow.com newsroom. “We knew we had a great design, we knew the thousands of pages of documents we used to support our original application that all told a story about how important this facility would be for our community and how we needed to replace aged assets that were no longer doing what they needed to do.”

Smith says the current, 110-year-old library is beautiful, but the time has come for it to be replaced.

Outgoing Bracebridge Public Library CEO Cathryn Rodney says the current library at 94 Manitoba Street is 8,700 square feet. She explains the industry standard calls for one square foot per capita. Based on that calculation, the library should have almost double its current space at 16,000. The new facility that will be included in the community centre will be 25,000 square feet. “We are building for the future, which is what you should be doing when you’re spending millions of dollars,” Rodney says.

While tempting, there are no plans for Rodney to cancel her impending retirement and stay on in her role as CEO. “There’s a little part of me that would love to be here for this,” she says, before adding the new yet-to-be-named CEO will be able to handle the work.

“This will chart a new better path for recreation and learning in Bracebridge for decades to come,” Smith says. The original plan was to do these projects together, but town staff had to pivot when they were denied funding. Smith says doing it all together is the cheaper option. During his remarks, he noted there’s a possibility another ice surface gets added after the community centre is completed if needed.

In June, Fowler Construction was awarded the $4.5 million contract to prepare the site for construction. It’s expected that a general contractor for the project will be decided by September with the project projected to be wrapped up by the summer of 2023. “We’re maybe two months off schedule,” Bracebridge’s Director of Recreation Cindy O’Regan says, adding they’ve known about this funding a “few weeks.” She expects the site preparation work by Fowler Construction to start next week, with a general contractor and construction to start by mid-September.