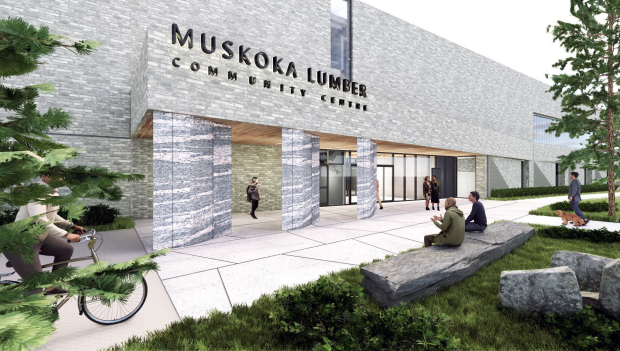 Six Muskoka businesses have signed on to provide funding for the Muskoka Lumber Community Centre (MLCC) in exchange for naming rights to some of its amenities.

Muskoka Leon’s, Quemby Electric, Hoos Law, Sifft Electric and Muskoka Rock along with Fowler Construction have entered into agreements with the Town of Bracebridge to support the construction of the facility. “We’ve been incredibly blessed with support for this project,” Bracebridge Mayor Graydon said during an announcement held on the property that will house the future MLCC.

Fowler is currently on-site preparing the 20.8-acre property for the yet-to-be-named general contractor. They gave the town a $250,000 discount on the site-enabling works contract to bring it down to $4.5 million. In return, the ice-resurfacer will be named after the company.

Muskoka Rock’s contribution will see them donate $33,810 of in-kind rock along with $96,190 over the next 20 years for the naming rights of the courtyard. The total contribution equals $130,000.

Sifft Electric will contribute $35,000 over the next decade in return for the naming rights to the water filling stations in the lobby of the MLCC.

Also contributing $35,000 is Hoos Law, but they’re spreading out the funding over the next 15 years. It’s being done in return for the naming rights to one of the team rooms in the Muskoka Lumber Arena.

Quemby Electric’s $30,000 contribution will be spread out over the next five years and, in return, the score clock in the area will bear the company’s name.

Muskoka Leon’s will cut a $10,000 cheque every year for the next decade. In exchange, the town will purchase $100,000 worth of furniture, fixtures and equipment “at competitive pricing.” The agreement will see the auditorium named after Leon’s.

In July, Muskoka Lumber entered a 20-year agreement with the town in exchange for the community centre to be named after the company. The agreement will see the company contribute $100,000 annually, plus $200,000 of in-kind wood products to help with the construction.

In June, Premier Doug Ford announced an investment of $16 million from the province. It allowed for the construction of a new library and multi-sport field house to move forward, after those aspects of the project were pushed aside when the town was previously denied federal and provincial funding.

The preperation work on the site is expected to be finished by November, with construction scheduled to get underway by March 2022. The building is slated to open in fall 2023.