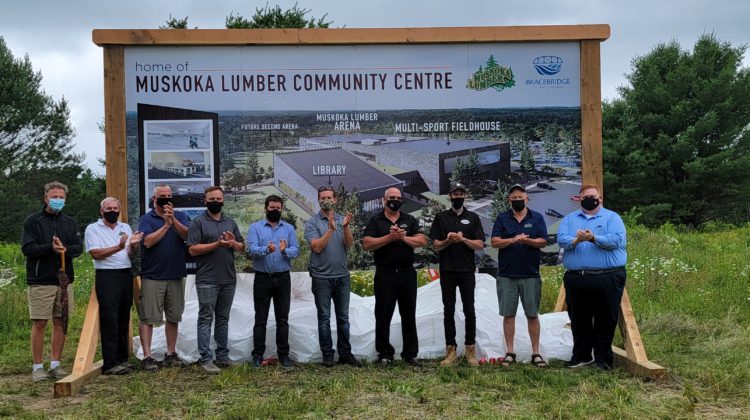 Representatives from the Town of Bracebridge and Muskoka Lumber were on hand for the announcement (Photo credit: Mathew Reisler)

The 126,680 square foot centre will include the aforementioned arena, a new library, community auditorium, indoor multi-sport fieldhouse, common lobby, outdoor play spaces, trails, and 330 parking spaces. There is also room being retained for a possible second arena, which hinges on the future growth of the community. It will not be built as part of the initial construction of the community centre.

“Muskoka Lumber and Building Supplies is a locally owned and operated business since 1988 and we have a long history of philanthropic giving in Muskoka,” President of the company Jason Sifft says. “The stakeholders want to continue this tradition of building communities and through this contribution we are supporting recreation, arts and cultural opportunities to the residents and visitors to Muskoka.”

Mayor of Bracebridge Graydon Smith says it’s “incredibly exciting” to have Muskoka Lumber be part of this. “They’re a great local employer and they’re a great community contributor,” he adds. Smith says the lumber being donated will be used to construct the front lobby which he boasts will enhance the community centre’s “Muskoka look and feel.”

There are also plans in place for the other spaces within the facility to be named. Marketing agency Performance Sponsorship Group from Orangeville, Ontario has been brought on to help town staff with that.

In late June, Ontario’s Premier Doug Ford visited Bracebridge to announce the province will be investing $16 million into the project. The Town of Bracebridge will cover $42.8 million. “We have been setting aside for several years now incremental increases within the existing budget that have been going to reserve and that capacity can be transferred into debt servicing for a big loan,” says the town’s current Chief Administrative Officer Stephen Rettie, who was the Treasurer during the project’s infancy. He adds those contributions have been happening since 2010.

“Our job at the lower tier of municipal government is to look after a lot of other things including recreational and cultural components,” Smith tells the MyMuskokaNow.com newsroom. There has been criticism levied at the town for not using some of the millions that will be invested into the community centre to address the affordable housing crisis. Smith points out that the issue is handled by the District of Muskoka, not the municipalities like Bracebridge. “That doesn’t mean the other problems – especially housing – aren’t problems that need work, but there are other people working on that,” he goes on to say. “It’s simply that one level of government can’t solve every problem.”

The investment being made by the town is likely to come down, though, with the community fundraising campaign set to get underway this month. Smith says the naming of the building is an unofficial “kick-off” for that part of the project. A committee has been formed and they will be talking to businesses in Muskoka who are interested in making a contribution to the construction of the Muskoka Lumber Community Centre. “The more we can raise from within the community, the less debt we will take on to build this,” Smith says.