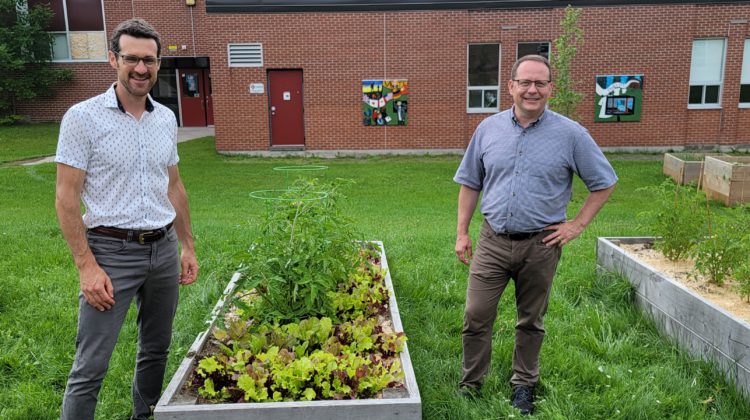 The leader of the Green Party of Ontario is hoping the party’s plan to tackle the housing crisis will help them win more seats in the next provincial election.

Mike Schreiner is stumping through the region with Matt Ritcher. Schreiner won the party’s first seat when he took the seat for Guelph in the last election. “People realize how hard it is to get that first seat,” he tells the MyMuskokaNow.com as he travels to Muskoka with Richter, who will serve as the party’s candidate in next provincial election. “We absolutely plan to reelect the one seat we have and elect more Green seats.”

Schreiner is the Green Party of Ontario’s second leader and has served in that role since 2009.

He’s travelling through our region because he believes the momentum they gained from getting a seat in the Legislature in 2018 will continue. Schreiner puts Matt Ritcher at the “top of the priority list” of candidates he believes can be elected. But the Parry Sound-Muskoka riding has been won by a member of the Progressive Conservative party in every election since it was established in 1999. Norm Miller has been the incumbent MPP since 2001. Last time out, Richter and the Green Party got 20.02-percent of the vote, finishing third behind Miller and the NDP’s candidate Erin Horvath.

Schreiner is touring the region to promote his party’s “bold plans” to address the affordable housing crisis. “Over the last few decades, the affordability crisis has been growing, but it has reached a breaking point during COVID,” he says. His housing strategy includes building 100,000 affordable rental units over the next decade and investing $5 billion into the Green Building and Business Program. He explains the plan will be implemented over the next four years to provide grants and interest-free loans to help homeowners, renters, and businesses invest in energy efficiency and conservation.

How will all of that be paid for? Schreiner says they will expand speculation and vacancy home taxes. “We believe housing should be for people, not speculators,” he bluntly says. He adds the hope is that the speculation tax dampens the financialization of the housing market, which is making housing more unaffordable, and will, in turn, raise revenue for the government to invest in housing. Schreiner also plans to subsidize electricity prices. “Those benefits disproportionately go to high-income households,” he says, adding the Green Party will move the focus to lower-to-middle income communities and use the money to invest in affordable housing.