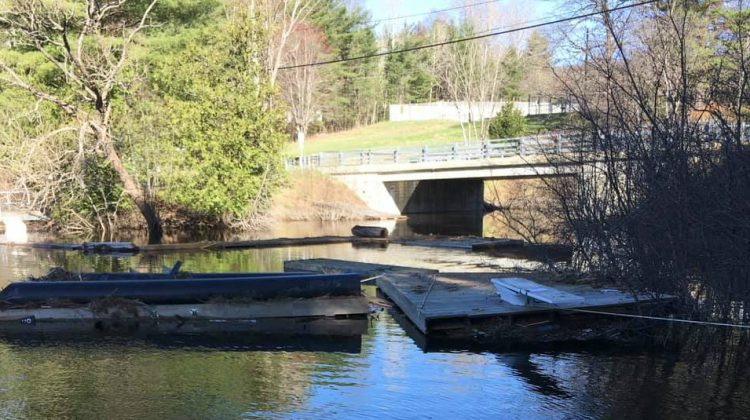 Runaway docks have been collecting at the floating snowmobile bridge in Bracebridge. (Sam Waldie Photo - contributed)

A collection of docks has been created on a floating snowmobile bridge.

Samantha Waldie’s mother has a property near the snowmobile bridge that floats between Beaumont Drive and Santa’s Village Road. She was putting out pictures last week of the docks that had gotten stuck floating downstream on the Muskoka River.

Waldie is hoping they can be reunited with property owners who have lost their dock due to the flooding this spring. And in a twist, her husband was part of the army reserve unit that rescued and tied them to the bridge.

A couple of docks are also tied up to her mum’s dock for safe keeping.

“My husband was actually deployed with the army so he was part of the team that removed the debris,” said Waldie.

She says a large amount of debris was hanging up on the bridge at the height of the flooding and it had to be cleaned up.

“So there was a ton of garbage as well, a bunch of stuff that had to be thrown out,” she explained. “And then they salvaged what they could in terms of the docks and tied them off so that one day when the snowmobile bridge is removed they didn’t go further floating down the river.”

She says one of the seven or so docks is identified through a contractor’s information being on it, and it will be retrieved once the water flow slows down.

If you are missing a dock and think one of them could be yours you can take a look from the shore and determine if it belongs to you or not.