Bracebridge family go above and beyond to treat trick-or-treators 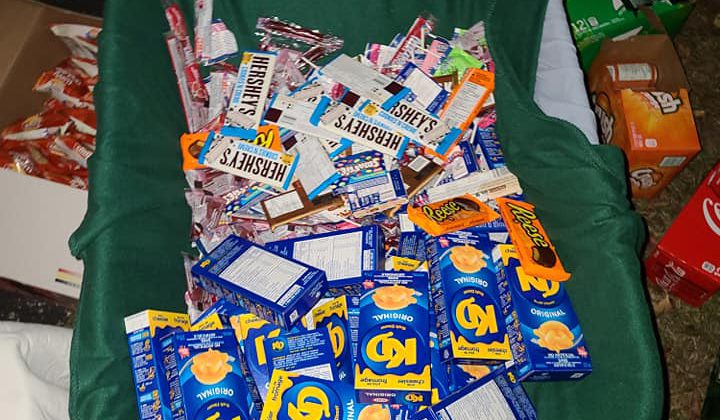 Some of the "hundreds" of treats put out by Paulette Glass-Trefry's family and neighbours for trick-or-treaters to pick through (Photo credit: Brooke Morrow)

Halloween felt a lot different this year because of the coronavirus, but Bracebridge resident Paulette Glass-Trefry’s family and a few of her neighbours wanted to do what they could to make it feel normal.

“2020 has been extremely hard on everyone,” she tells the MyMuskokaNow.com newsroom. So she and the group thought-up an idea with the help of their neighbours to set a giant candy display in front of their home and allow people to take as much as they want. “If it put a smile on their face then it’s all worth it,” Glass-Trefry says.

There was so much put out, she says she has no idea how much exactly was out there. As the night went on, Glass-Trefry’s neighbours Brooke and Ann added to the pile.

“We did what we could for the kids this year,” she says. On top of the Hershey’s and Reese candy bars that were put out, boxes of Kraft Dinner and drinks were left as well for kids to pick through as they travelled through the neighbourhood. “We brought together what we could,” Glass-Trefry says.

It wasn’t a busy Halloween like it usually is with some residents choosing to stay inside this year because of the virus, but Glass-Trefry says there were still plenty of families that came by to get some candy. “They got to pick as much as they want,” she says. There were some left-overs at the end of the night, but Glass-Trefry says she didn’t keep any of it. She says she made sure her neighbours came and got what was left because she didn’t want to be tempted to eat what was left.

“I hope everyone had a safe and happy Halloween,” Glass-Trefry says.