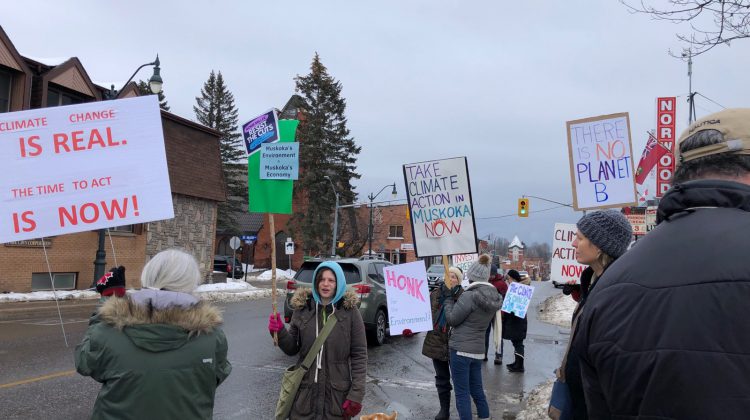 BRACEBRIDGE, ON-Climate Action Muskoka is collecting signatures for their petition.

What has become a regular occurrence every Friday since September, the climate action group is asking residents to sign their petition so they can convince municipal and federal governments to take serious climate action.

One of the organizers of Climate Action Muskoka Tamsen Tillson said that they have been out in front of Memorial Park every week trying to bring more attention to climate change. “When people drive past us we have big signs that say honk for climate action and we have a lot of people honk when they see our signs.”

Tillson said that they would not have been doing this until young activists “woke them up.” Tillson continued by saying that “we are awake thanks to activists like Greta Thunberg and we want to help bring attention to get the government to take serious action.”

She said that they have talked to Mayor Graydon Smith, MPP Norm Miller and MP Scott Aitchison who all want to help promote climate action. “A while ago we met with Miller and he seemed very interested in helping the cause,” said Tillson.

Tillson finished by saying that she hopes she can get all of Bracebridge to get involved in taking climate action.