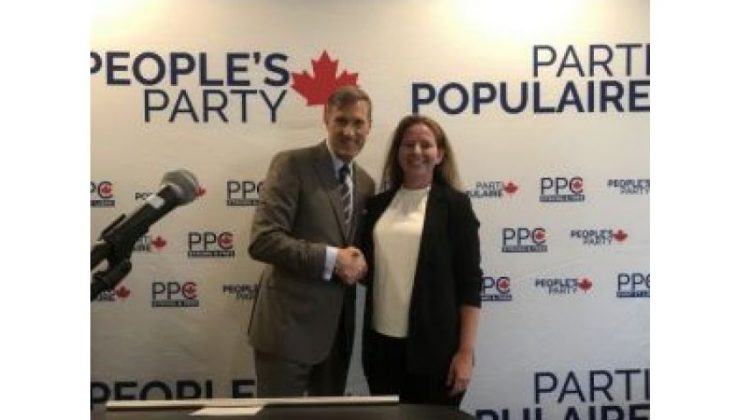 Former PPC candidate Michelle Smith, right, is shown with party leader Maxime Bernier in a photo handout from the party.

MUSKOKA, ON- You won’t see a candidate from the People’s Party on the ballot this month.

Earlier this week, candidate Michelle Smith for the People’s Party of Canada in Parry Sound-Muskoka dropped out of the federal contest, citing personal reasons.

Tracey Bobyk, the president of the party’s riding association, told the MyMuskokaNow.com newsroom that she had no further details on why Smith dropped out.  She also indicated that a new candidate for the party in the riding is not in the works.

Efforts to reach Smith for comment have not been successful as of this report.

According to Rejean Grenier, a regional media advisor for Elections Canada in Ontario, the lack of a new candidate puts the party out of the running in Parry Sound-Muskoka.

Grenier said that most candidates don’t wait until the absolute deadline to file their registration papers, due to the length of the process.

“Most people, knowing that, would not wait until the last minute,” said Grenier.

“It’s like anything else. If you really want to do something, you first find out what the rules are, what the deadlines are, and you obviously try to meet them. It’s like when you were in university. Did you wait till the last minute, to write your essay? You did not. “

Smith will not appear on the ballot on October 21st.

Confirmed candidates are Scott Aitchison for the Conservatives, Trisha Cowie for the Liberals, Tom Young for the NDP, Gord Miller for the Greens, and Daniel Predie Jr as an independent.