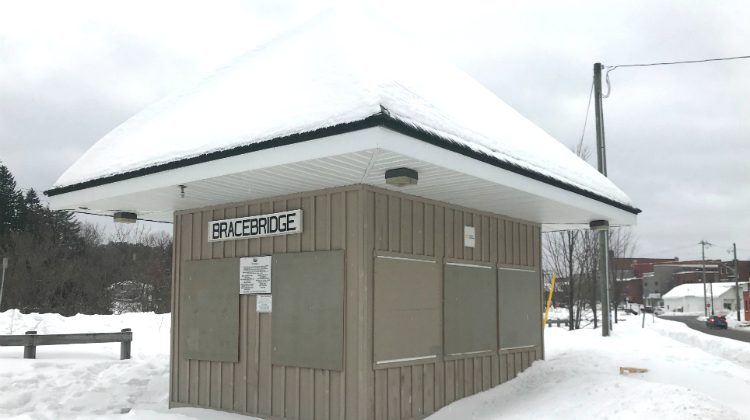 There is still a passenger waiting area for train service in Bracebridge. (Doug Crosse Photo)

The co-chair of two organizations trying to bring rail service back to Muskoka is not disappointed.

Lucille Frith was at Queens Park for the release of the 2019 budget, and even though a promised $45 million was not there, the promise of passenger service in Muskoka remains.

Frith is referring to announcements made repeatedly by Nipissing MPP and Finance Minister Vic Fedeli whose home riding is the headquarters for Ontario Northland.

“I left quite satisfied that we are in process,” says Frith.

Much of central and northern Ontario lost passenger rail service in 2012. It was replaced by a bus system. Fedeli and Ontario Northland President and CEO Corina Moore are continuing to plan for rail service says Frith.

“These types of things do not happen overnight,” she offers. “Corina Moore is going  to submit a proposal for the government in November.”

In her roles with the North Eastern Ontario Rail Network (NEORN)  and the Committee Promoting Muskoka Rail Travel (CPMRT) Frith has been keeping the pressure on with the province to ensure $45 million promised will eventually turn into a commitment for passenger rail service.

Frith is frank about where the priorities for passenger rail and needs for people in central and northern Ontario rate among other bigger issues in southern Ontario.

“I understand this is not going to be a huge priority in the rest of the province, but it will happen one day,” she says optimistically. “For the last nine months there have been a lot of behind the scenes things going on and that was essentially what Vic Fedeli’s comment (during the budget announcement) that we have had discussions with Ontario Northland. Corina Moore has said they are working on a plan. They are structuring this so it is sustainable.”