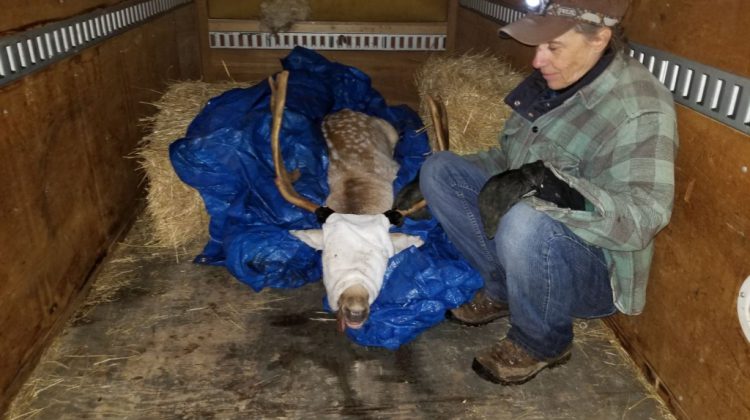 Charlotte Hooper with the tranquilized reindeer prior to its removal from a truck. (Howard Smith Provided Photo)

The escaped reindeer from Santa’s Village is home.

After nearly a week wandering around the woods near the popular kid’s theme park, the missing reindeer, named Dasher, was finally recovered through the help of Aspen Wildlife Centre.

Howard Smith, the managing director of the Sanctuary was the man tasked with darting the approximately 150-pound male reindeer.

He says once the animal was contained on the front lawn of a resident on Golden Beach Road they determined it could not stay overnight in the temporary enclosure. Around 9:00pm last night, Smith got his crew together and they proceeded to hit the reindeer with a tranquilizer dart.

Smith explains that normally they would not dart a wild deer at night because it could cause harm if the animal bolted after being hit. But in this case, with a partially domesticated deer in an enclosure, the decision to do it in the dark was made.

“It took about eight minutes for the drug to take effect,” reveals Smith. “We got him back to the facility and had to section off part of the pen to keep him away from the other animals.”

Smith then gave the reindeer a stimulant to reverse the effects of the first dart.

“I gave him a reversal drug and he was up in about 15 minutes,” he says.

While online commenters have made light of the whole caper, there were some worrisome scenarios that neither the Ministry of Natural Resources and Forestry nor Smith wanted to deal with. The reindeer was on a lightly travelled secondary road, but if it had gone towards Highway 118 there could have been a collision with a car or truck. And longer term, having a male reindeer in the wild with whitetail deer about to go into breeding season, there is a remote chance of a cross-species interaction.

“They are different species so I don’t think it was likely but our deer are coming into rut now,” Smith offers. “I think the ministry was pretty relieved that he got back in safe and sound.”

The Aspen Wildlife Sanctuary is a not for profit organization that rescues wild animals in distress. You can find their website by clicking here.

The wayward reindeer engineered his escape using his substantial antlers to create a gap in the fence.