Students at Pine Glen enjoy a bit of Time Travel 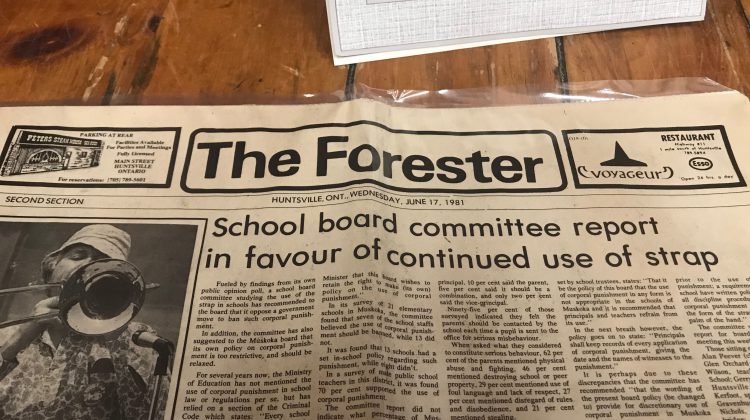 A copy of the Forester with a headline promoting corporal punishment by Muskoka Board Committee. (Doug Crosse)

The discovery of a long overdue time capsule in the crawl space of Pine Glen Public School turned into quite the event for students, staff and former staff who were on hand for the opening of the large metal box buried in 1981, some 37 years ago.  It was part of a class project by teacher Tom Conlin.

According to Bob Earl, who was a student in grade 8 at the school in 1981, he never forgot about the box and began to ask about, as it was scheduled to be opened much sooner.

With urging from Earl, Conlin chased down the idea of finding the box.

The pair opened the box to recover what they had buried so many years before. Some moisture had gotten into the container saturating unprotected papers, but most items were still legible. There was a Sears catalogue that showed the fashions of the time, a sealed copy of local paper The Forester. It had a headline espousing the public support to the Muskoka Board of Education that more, not less corporal punishment, should be allowed through the use of the strap.

There were also notes from the grade 8 students who were about to graduate that day, with many of them thinking about high school and university and what they would like to do with their lives.

Principal Peter Edwards says it was great to showcase some old style archiving to students who upload their lives in the cloud and give them a look at living history.