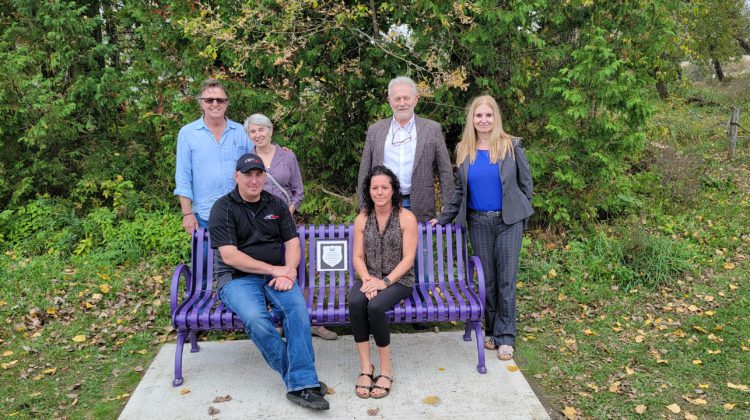 Mark Boland and his sister Shelley Page sit on the bench dedicated to their mother Wendy alongside Dawn and Ed Novak (left) and Alison Irons and her partner Greg (right) (Photo credit: Mathew Reisler)

The memories of Wendy Boland, Natalie Novak and Lindsay Wilson will never be forgotten.

Three benches have been installed at Annie Williams Memorial Park, the Bracebridge Sportsplex and Memorial Park to honour the three women who lost their lives in town and to others who have died because of acts of domestic violence.

“This is one of those where I wish we didn’t have to be here for it,” Mayor Graydon Smith said during the ceremony. “I really wish we could take a big step forward and never have to utter the words ‘domestic violence’ again, but we’re better taking little steps forward – and this is one of those little steps.”

The family members of Boland, Novak and Wilson attended the ceremony at Annie Williams Memorial Park.

Boland’s son Mike spoke about how thankful he is for the community’s support over the past five years. “When my sister and I went through this, you guys were there for us. That means a lot,” he said, fighting back tears. “Thank you.”

He explained the significance of the bench being placed in the park. When he and his sister Shelly were kids, they would walk from their home on nearby Wellington Street with their dogs to play in the park. They often spent time by the river – which is where the bench is located – watching the sunset. “To be able to walk our dog through here and sit down on a bench in my mom’s memory means so much to us,” Boland told the crowd of people that attended the unveiling ceremony.

The three benches are made possible thanks to a partnership between the town, the Natalie Novak Fund and the Barb’s Benches Project. The project was started in Nova Scotia as a tribute to Barbara Baillie who was killed by her husband of nearly 25 years in 1990.

In May 2006, with the support of the Muskoka Women’s Advocacy Group, Natalie’s mom Dawn started the fund.

Novak said the groundwork for the fund was started the day before Natalie’s funeral. “My birth was a blessing, sent to live and die on earth as a lesson.” Novak says she discovered those words that were written by her daughter on the eve of her funeral. At that point, Novak said, in hindsight, that was the beginning of the Natalie Novak Fund, which aims to prevent and educate people on relationship violence.

Each bench has a plaque with a short story about the person it’s dedicated to (Photo credit: Mathew Reisler)

“For each crime of domestic violence, there are so many victims,” she says. It spreads to neighbours, friends, teachers, doctors, and even the frontline workers who attend the scene. “They often experience duress, difficulty and sometimes even danger while doing this job,” Novak said.

“Somehow we all feel a little more vulnerable,” she added.

Novak shared a statistic from a report done by the Canadian Femicide Observatory for Justice and Accountability: every two and a half days a woman is lost to domestic violence. When her daughter was killed in 2006, that number was six. “We’re losing more women,” she said. “Too many women. To this preventable and often predictable act of terror. We need to do better.”

Alison Irons is Lindsay’s mom. Wilson wasn’t a part of the community. “She came here to go to the Muskoka campus of Nipissing University,” Irons explains. “She loved the community when she was here.”

She tells the MyMuskokaNow.com newsroom she’s grateful for the community who have refused to forget about her. “Today is the culmination of that,” she said.

Irons says 40 years ago she was an RCMP officer in Vancouver and was on the board for the North Shore Women’s Shelter. “Now here we stand 40 years later commemorating three more women and it’s still happening and this is the 21st century,” she said. “If you ask me if that makes me angry, you bet it does. This femicide has to end. I know like Dawn and many others standing here today I will work to my dying day to see an end to that kind of violence to our women and girls.”

“We will continue to fight against domestic violence,” Irons says. “Unfortunately the murders of our children turn us into activists.”

Smith said he’s thankful for the family members attending who continue to raise awareness of domestic violence and the “hideousness of it.” He added that it wasn’t just the families that were impacted by what happened, the entire community felt the loss of these three women. He credited Novak and her husband Ed for their “drive and spirit” in remembering their daughters and other women that were murdered in the community

“We simply need to do better as a community,” Smith said. “We’re failing women as a community every time something like this happens. Men need to step up, quite frankly.”

“If you are anyone you know needs help, please reach out,” the plaque dedicated to Boland reads. “You are not alone.”