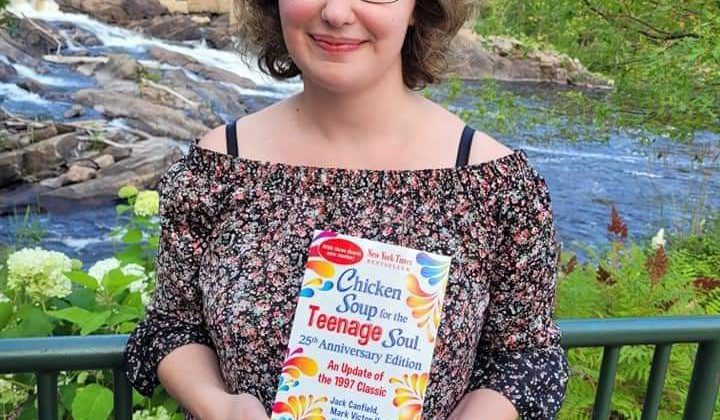 When you open “Chicken Soup for the Teenage Soul 25th Anniversary Edition” the first story you will read is by Gravenhurst’s Julia Tilson.

“I’ve always had chicken soup books around the house,” she tells the MyMuskokaNow.com newsroom. The spin-off book series debuted in 1997, around the same time Tilson was born, with the main chicken soup series being first published four years earlier. Like many people her age, Tilson grew up reading – and being read – the stories in the chicken soup books, all the while never putting much thought into the authors of the stories. “You see a lot of celebrities in there, you see a lot of news anchors,” Tilson says. “You don’t think that a small-town person could get in.”

The aspiring writer has been working on manuscripts since she was young with one of her earliest – and longest – stories based on a game she would play with her sister when they were younger. “It’s about this fictional character I used to play with my sister,” she explains. “We made up these fictional people who had these interactions and it became like a fairy tale.”

The problem with attempting to gain traction as a writer is you need to have published work, but Tilson says doing that is easier said than done. She’s spent most of the COVID-19 pandemic researching ways to get her stories published. A few months ago she stumbled upon a website to submit stories for the next chicken soup book. “I thought ‘okay I’m 25, my teen years really weren’t that long ago,'” Tilson says. She submitted her story and didn’t think about it until a couple of months ago when she got an email telling her she made it through to the first round of selection, then she got another confirmation, and another, and another, before eventually she was told she made it into the book.

“My story is about friendship,” Tilson explains. “It’s about how a friendship didn’t end well in high school and how I did my best to make things better afterwards.”

On top of her story, she says there are other “great, inspirational” stories in the book. One of Tilson’s favourites is a short story about a girl who was adopted and the relationship that grew between her and her adoptive mom.

While she does write fictional stories, everything she writes is inspired by her life. Life has been far from easy for the 25-year-old. When she was 10, she was in a coma for 11 days because of a brain bleed. It resulted in her having to be home-schooled for a time before she was able to be integrated back into class at Gravenhurst High School. Over the next 15 years, she’s been in and out of the hospital, with another visit scheduled in just a few weeks. “I’m pretty nervous about that,” she says.

In 2012, it was thought that Tilson was in the clear. This past summer it was discovered that she’s suffering from another brain bleed. Staff at the South Muskoka Memorial Hospital attempted to treat the problem area but weren’t able to, so she’s scheduled for gamma radiation treatment later this month. The surgery will be done to treat the weak blood vessels in her brain that have caused the two brain bleeds.

“Our hospital was excellent in detecting,” Tilson says, crediting the work of the staff locally.

“Chicken Soup for the Teenage Soul 25th Anniversary Edition” is hitting bookshelves on Tuesday. It will feature Tilson’s and hundreds of other stories about how to handle going through your formative years.