Two well-known Bracebridge nurses set to hang up their scrubs 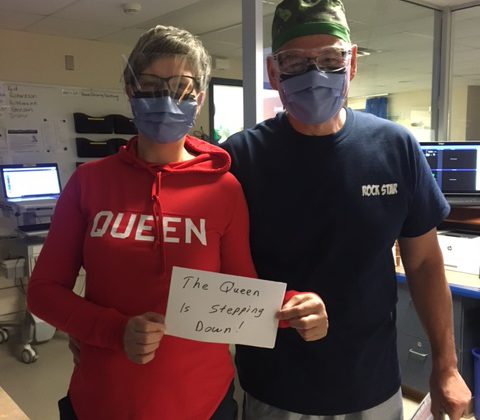 A Bracebridge “icon” and “the Queen” are set to retire from the South Muskoka Memorial Hospital.

Registered nurses Way Lem and Lisa Boyes have worked at the Bracebridge hospital for 32 and 35 years respectively.

“There isn’t a person in town who hasn’t met this amazing man,” their colleague Paula Snyder tells the MyMuskokaNow.com newsroom. She adds that working with the “excellent” Boyes has been a treat as well, saying their 70 years of nursing experience has meant a lot to the hospital.

Despite being such a well-respected nurse now, Lem’s dream job was to get into radio and television. “I was working at a company in Brampton and decided that I was going to change careers because I no longer wanted to live in Brampton,” he says. Being a nurse gave Lem the flexibility to move further north to be closer to his parents in North Bay and in-laws in Bracebridge. “Before I even had my certification as a registered nurse, (the hospital) called me up and offered me a job,” he goes on to say.

“Lisa and I, and quite a few others, have shared a lot of incredible experiences,” Lem says.

Boyes and Lem have worked together for 30 years. She says when he was starting at the hospital, one of his training sessions involved him being in the operating room when she was giving birth to her daughter. “We know each other very well,” Boyes adds.

She retired in June, but because of how close the two of them are, it was decided that their send-offs would be combined.

Over three decades of being a nurse, Boyes has seen a lot. “The biggest change has been the setup of systematic protocols and computerized systems,” she explains. In her time at the hospital, the way they give cardiac care has improved as well. She says with the advancements in technology, they are now able to move a lot quicker to give care to people.

Boyes says she will miss going to work every day. “I think a lot of it is you have a certain identity about what you do and who you are,” she says. While she will enjoy spending more time on her dock on the Muskoka River, she will miss seeing her colleagues. “It’s like a second family,” Boyes says.

Snyder says Lem is well known for always saying “Elvis has left the building” at the end of his shifts. He says the phrase has no relevance to anything, he just wanted to let everyone know he was leaving in a funny way. “I usually add “thank you, thank you very much,” he adds. Boyes is well known among her colleagues for always being someone who is open to lending them a hand, so Snyder says she’s affectionately called the “Queen.”

“I’m most proud of being a teacher and a mentor,” Boyes says. “I think a lot of colleagues have looked towards me to help them through the day.”

“There’s no reason we can’t have fun and enjoy our time together and give our care, but with a smiling face as well,” Boyes adds. Over the past year especially, Lem and Boyes agree, while there is a lot of pressure on people doing what they do, it’s important to take time during the day for themselves.

In time for their retirement party, Snyder says t-shirts were made saying “Elvis has left the building” for Lem and “the Queen is stepping down” for Boyes.

Now that Elvis has officially left the building or rather the hospital, Lem says he will miss working with a “phenomenal group of people.” That doesn’t mean just his fellow nurses, but everyone at the hospital from the maintenance crew to the ones working in the lab to the people that come in at night to make sure the hospital is clean. He says paramedics and the police deserve credit as well. Lem says they play a vital part in making his job easier. “I’ve always considered everyone as part of the team,” he says. “They make the hospital.”