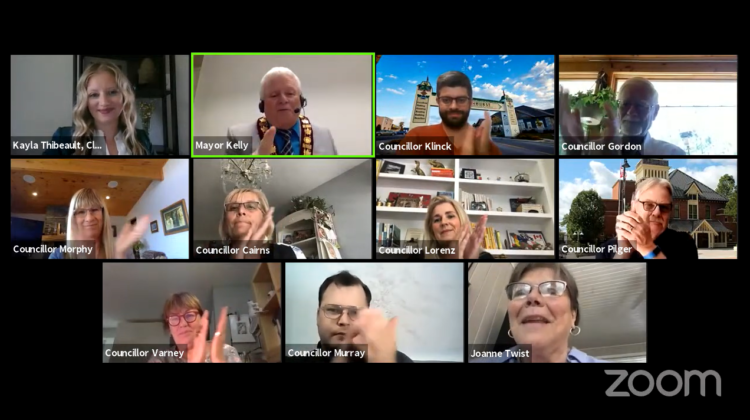 Joanne Twist was given a round of applause after being named Gravenhurst's Senior of the Year (Photo credit: Town of Gravenhurst on YouTube)

The Chair of Gravenhurst Against Poverty has been named as the municipality’s Senior of the Year.

“It’s very overwhelming,” Joane Twist says. Minutes before speaking with the MyMuskokaNow.com newsroom, she was speaking with her grandson who told her how proud of her he is. Twist says there were a bunch of her family members that tuned in to Gravenhurst’s council meeting on June 15th to watch Mayor Paul Kelly present her with the award. “It’s very humbling,” she says.

Twist has been volunteering since coming to Gravenhurst in September 1999. “You never do it with the expectation that somebody is going to do something about it,” she says. “You just do it because you want to be a part of the community.”

Mayor Paul Kelly says Twist has made a difference since the first day she stepped foot in Gravenhurst. “It’s hard for anyone to match you,” he said during the council meeting. When virtually presenting Twist her plaque and certificate from the province and town, he joked about how it’s mentioned that the award is only for members of the community over the age of 65. “I don’t know why they put that in there,” he said. “Who needs to know that?”

“Joanne brings people together for the betterment of our community,” said Deborah Chisholm in her nomination form submitted to the town. “She reaches out to new members of our community and is instrumental in introducing them to activities and groups that will make their experience in our town meaningful and engaging. She is unfailingly inclusive to all. It is through the contributions of people like Joanne that Gravenhurst is perceived as a caring and vibrant community that supports each other in good times and in difficult times.”

“The fact that someone in this community took the time and effort,” Twist says while fighting back tears. “To submit an application for my recognition means a lot.”

Her parents instilled in her the importance of giving back when she was young. Twist grew up in a “teeny town” so there were plenty of opportunities to do that. “We all did volunteer work,” she says of her family. When Twist was planning her retirement, it was important to her to find a town to live in that valued volunteering as much as she does.

While she’s the one that will have a plaque to display on her mantle, Twist says she’s one of the many “incredibly generous” people in the community who give back any way they can. She adds that they, like her, don’t do it for the awards, they do it because they love the community.

The Ontario Senior of the Year Award gives each municipality in Ontario the opportunity to honour one outstanding local who, after the age of 65, has enriched the social, cultural or civic life of his or her community.

“I hope other people are inspired to take advantage of the other wonderful opportunities to volunteer,” Twist says.