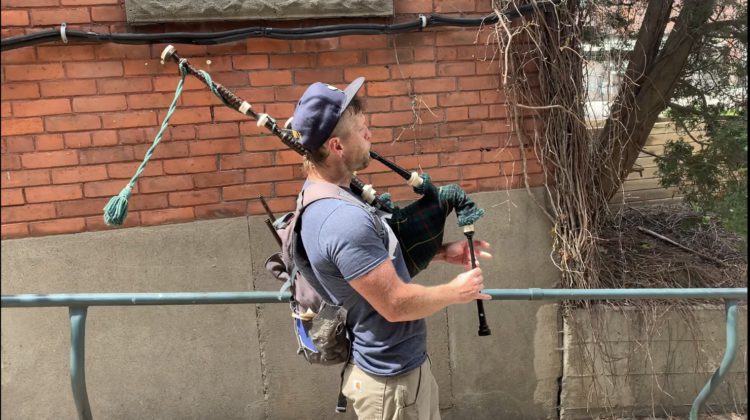 Steve Holmes on one of his bagpiping trips through downtown Bracebridge (Photo credit: Remy Smith)

The sound of bagpipes is unmistakable – some might even say it’s distracting – which is exactly why bagpiper Steve Holmes spends some of his afternoons roaming throughout Muskoka.

“The sound was just something so different,” he tells the MyMuskokaNow.com newsroom about the first time he heard the bagpipes. He began playing in 10th grade when he lived in Newmarket, Ontario. “For those that it affects, it’s like, you feel it,” he adds. “You feel that music.”

When his parents split up, his mother went to live in Ottawa, while his dad bought a place in Gravenhurst. He stayed with his mom for a little while, which is when his love for bagpiping grew. Holmes joined the Cameron Highlanders of Ottawa Royal Canadian Army Cadet Corps. He wasn’t planning on learning more about the instrument, but the higher-ups wanted some of the cadets to learn how to play the bagpipes. He spent some time learning, but it wasn’t long after that he moved in with his father in Gravenhurst. He joined the Muskoka Pioneers and, at the time, was still very much a novice bagpiper.

Holmes eventually joined the Bracebridge Legion Pipes and Drums. “They were offering free lessons,” he explains. Over two decades later, he’s still playing with them.

Now he plays bagpipes around town, but it isn’t something he’s started because of the COVID-19 pandemic. He started it 10 years ago as a way to give his neighbours’ ears a break. He would spend hours practicing in his backyard so, to give them a break, he decided to practice on the go. “I take (my bagpipes) with me when I go camping,” he says, adding he also walks through downtown Bracebridge and the surrounding area once or twice a week.

He’s made a point over the past year to try and get out more often to brighten people’s spirits. It’s also in part because the Legion Pipes and Drums aren’t playing as often because of pandemic protocols. “It’s one of those instruments that you have to keep up with if you want to play it well,” he explains.

Holmes says the reaction has been positive. It hasn’t just been people thanking them, but some have taken pictures with him and taken videos. “There are people that it affects them really deeply,” he says. There have been couples coming up to him to tell him bagpipes were played when they got married and others saying the instrument was played during a loved one’s funeral.

Often he plays on his own, but sometimes he brings his kids along. He hopes they eventually take up music – specifically bagpiping – but he doesn’t want to push it on them. He says right now they’re a bit too young to really be into it. “The kids are all interested in playing and making music, but they’re a bit too young,” he adds.

Holmes doesn’t play on a fixed schedule. When the sun is out and it isn’t too hot, he will make time to play.