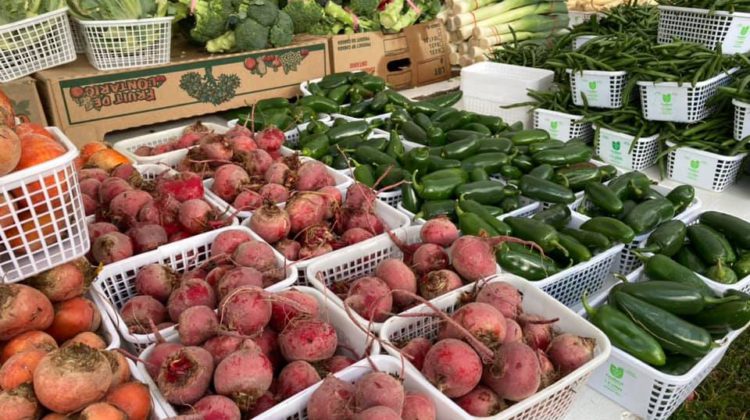 There will be 70 vendors on-site every Wednesday at 861 Bay Street from 8 AM to 2 PM until the end of October. Anderson says that includes people selling everything from food, cheese and meats to maple syrup, jam, and various arts and crafts.

You will only be able to walk one way around the market, as part of the COVID-19 protocols put in place. “Every stand is roped off in front so you have six feet of physical distancing,” Anderson explains. Screens have also been set up in front of pay stations. Volunteers from Gravenhurst Against Poverty will be at the entrance to the market pre-screening people for symptoms.

Blacksmith Jim Carter has been a vendor for the past 25 years. He says Wednesday was a picture-perfect day. Carter knew that the market would be popular this season, but was blown away by just how many people showed. up. “For a first day, it was really good,” he says.

Without a physical store, the past year has been tough for Carter. He says that most crafts shows have been cancelled which is where he sells most of his goods. “We basically make our living from spring until fall,” he says. Before today, the last show he did was on Thanksgiving 2019. Carter adds that the Gravenhurst Farmers’ Market has been good to him in the past, so he’s glad it’s up and running for the season, adding his fellow vendors and customers are like family, so it’s nice to see them.

Lynn Murden owns Yummies in a Jar in Baysville and echos that. “We’ve been waiting six months to get back here,” she says. Even while wearing a mask, her smile is easy to see. Murden says seeing friends like Carter, other vendors, and customers is wonderful.

She forgot a few of her products at her shop, so she jokes that it’s going to take her time to get back into the swing of things.

The first day of the farmers’ market meant it’s Pat Loewen’s last as its Marketing Manager. “I feel like my time has come to retire,” she says as the first day of the market wrapped up. She jokes that staying home because of the COVID-19 pandemic has shown her what retirement could be like.

“We started the market 30 years ago with 14 vendors and this market has grown so much,” she says. In a normal year, there would be close to 100 vendors on-site when you add in the guest vendors that show up during the season. Loewen boasts that a few years ago the Gravenhurst Farmers’ Market was named the best seasonal farmers’ market in all of Ontario. She says she’s proud of what has been built in Gravenhurst over the past three decades. “I’ve made some life-long friends at the market,” she says.

While she won’t be on-site in a professional capacity, Loewen says she will still be there almost every week. She jokes that the best part about retiring is that she doesn’t have to set her alarm to wake her up at 5:30 AM every Wednesday.