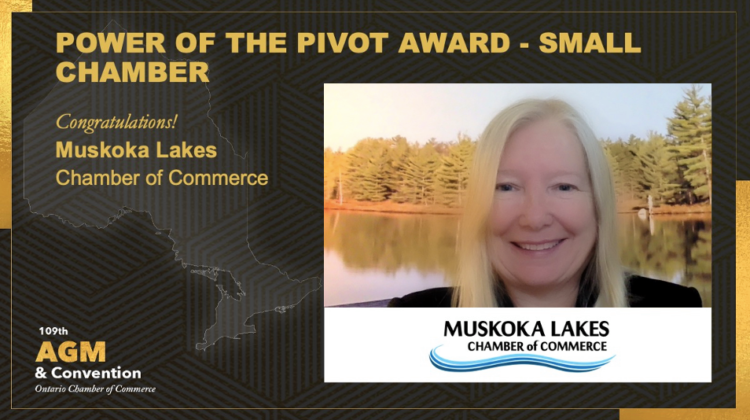 “I literally fell off my couch,” Executive Director of the Muskoka Lakes Chamber of Commerce Norah Fountain tells the MyMuskokaNow.com newsroom about her initial reaction.

The award is given to, “a chamber that has embraced the pressures and uncertainty of the COVID-19 pandemic, quickly modifying existing services and/or introducing exceptional new programming or services to meet member needs during a most challenging time,” according to the OCC.

When the pandemic started, Fountain and volunteers with the Muskoka Lakes Chamber, along with the other chambers in Muskoka, got the ball rolling with the idea of establishing a Muskoka Emergency Response Fund. She explains they did this because many of their members did not qualify for support programs because they’re based on their spring 2019 revenue, not 2020. “If you were a marina and you were already down because you couldn’t operate in 2019, in 2020 you could be doing better,” she says. When Fountain found that out, she was worried some businesses in Muskoka would “fall through the cracks” so she teamed up with Muskoka Futures and other chambers to lobby the District and other levels of government to create the fund.

“It took 14 weeks of lobbying individual politicians at all levels,” she says.

The initial ask was $750,000 from the District and $1.2 million from the federal government. That eventually ballooned to $5.5 million.

On top of that, she thinks the chamber’s “power of pivot” was changing government thinking. Fountain says they were one of the first to champion meeting virtual, thanks in part to her previous experience with virtual meetings. When the pandemic started, some municipalities were unsure of what to do and the chamber played a part in guiding them through the initial days and weeks of the pandemic. “There was a lot of discomfort,” she says of the initial reaction from members. “But I wouldn’t say it really got in the way. I think everyone realized we have to do things differently immediately.”

“I feel that this award is shared with all chambers in Muskoka,” she says.

Fountain adds that meetings are held on an almost weekly basis with the Bracebridge, Huntsville/Lake of Bays, and Gravenhurst Chambers of Commerce. “We have always worked together, but this past year has shown how important it is to work very closely,” she says, adding this award wouldn’t be possible without their support.

Fountain also points out that members deserve recognition for how they have stepped up. “We’ve seen members helping members,” she says. Fountain gives an example of Bala Taxi and Tours acting as a delivery service for Bala Falls Pub Fowler Construction helping the camp CNIB Lake Joe by providing them aggregate. Other members have “picked up the tab” for struggling businesses that haven’t been able to open during the pandemic. “That’s what Muskoka is all about,” Fountain says. “We shine that way. Everybody talks about being resilient, but nobody shows it better than here in Muskoka”

The award is for small-sized chambers, but over the past year the Muskoka Lakes Chamber of Commerce has grown by 49 members and is now classified as a medium-sized chamber. Fountain says they now have 334 members.