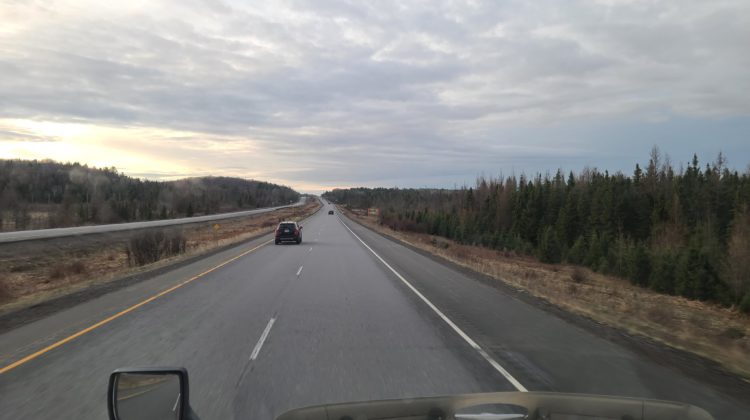 Matthew Marchand has been documenting his journey as a long-hail trucker during the COVID-19 pandemic. He took this picture along Highway 11 in Muskoka (Photo credit: @myworldtaw on Twitter)

As he passed through Muskoka, long-haul trucker Matthew Marchand took the time to speak to the MyMuskokaNow.com newsroom about his journey through Ontario, Canada, and even across the border and why he’s documenting it all on Twitter.

He started the account “My World Through A Windshield” just before the COVID-19 pandemic started as a way to make people aware of what truckers do. “A lot of people go to the grocery store, they buy things, and they’re not aware of what goes on behind the scenes to make that a reality,” Marchand says. 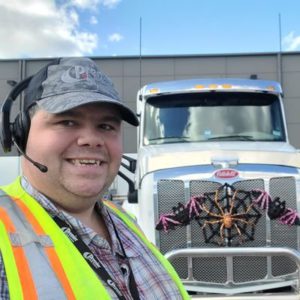 He’s considered a one-way trucker. “I really don’t know what I’m going to carry next,” he says. His current trip is going to take him to Nebraska. Marchand says he travels across the border at least once a week, but other than that he travels within Ontario. He used to work for a company out of Toronto that had him shipping things to places as far away as California. He most often is pulling raw materials like soaps, oils, or industrial chemicals.

Over a year into the account, Marchand says the reception has been mostly positive. “It’s a mix,” he says. “I have people that are quite happy, they support me. I have some that just don’t understand what we do. That’s alright too, I get it.”

The difficult part is when he runs into people who have – as he puts it – “relatively irrational fears” about him and other truckers. “We’re exempt from quarantine because it would be impossible to quarantine every time we cross the border,” explains, adding they don’t get tested for the same reason. His trip to Nebraska aside, Marchand doesn’t normally cross the border, but others might be doing that multiple times in a day. “I think that drives a lot of people’s fear that we’re potentially spreading COVID,” he says. Marchand thinks the fear is somewhat irrational because most – sometimes all – of his day is spent in his cab, with breaks only taken to go to the bathroom or get food. “Depending on the length of the trip, you might not interact with people for days,” he adds.

“At the start of all this, we had a very hard time getting food and supplies for ourselves,” Marchand says, pointing out that it was the same whether he was in Canada or the United States. The problem he ran into was that his tight schedule often didn’t allow for him to wait in line at the grocery store and being that he drives a 60-foot long truck, it’s not easy to find somewhere to park either. Near the beginning of the pandemic, Marchand was refused service at a fast food joint because he had to walk through the drive-through due to his truck not being able to fit.

With a family of three at home and another little one on the way, Marchand says it can get tough being on the road, isolated, for long periods of time, but what helps get him through it is knowing he’s doing an essential service. “You can’t lose sight of what you’re here for,” he says.