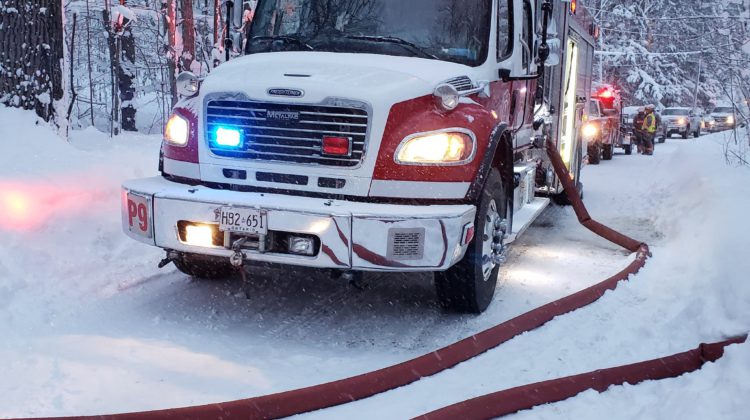 The Muskoka Lakes Fire Department’s Fire Chief says a fire last weekend highlights the importance of making sure the way is clear for firefighters.

Fire Chief for Township of Muskoka Lakes’ Fire Department Ryan Murrell says an unclear private roadway off of Penwood Road put them behind “seven minutes” in putting a fire out.

Three stations of the fire department were called to the scene Sunday just after 4 PM. No one was at home at the time and no one was injured. An investigation into the cause of the fire is on-going.

Murrell says it’s a common problem that driveways are not cleared at homes – specifically seasonal ones – in Muskoka. “It often presents a little bit of a challenge for fire vehicles that are larger getting down to the fire scene,” he says.

“Fires tend to grow faster than they did before,” he explains when asked about the importance of getting to a burning structure quickly. “They don’t get hotter, but they grow faster.”

Murrell says the department breaks down getting to the scene into three parts: access, address, and room.

“Can the keyholder meet us at the property to tell us things,” Murrell says about getting access to the scene. He adds that the quicker they can get to the fire, the quicker they can assess what is needed to fight it. “It allows for the first arriving units to call for more resources,” he explains.

Often, if the road leading up to the home or driveway is full of snow, first responders will have to wait for a smaller fire vehicle to show up. He adds that you should also make sure your driveway marker is completely cleared off.

With some seasonal properties having newly built private roadways, Murrell says it’s important to make sure there is enough room for fire trucks and other emergency vehicles to make it through. If you have a waterfront property, do you know if there is enough room for firefighters to get to it? Murrell says often they will go down to the dock by the property and use the department’s portable pumps when responding to a fire.

Murrell says in the summer the fire department can come to your property and check if they can do that. He suggests reaching out to your local department to schedule a time for that to be done.

“Every few minutes in an emergency can be life or death or determine whether or not we’re going to save a structure,” Murrell says.