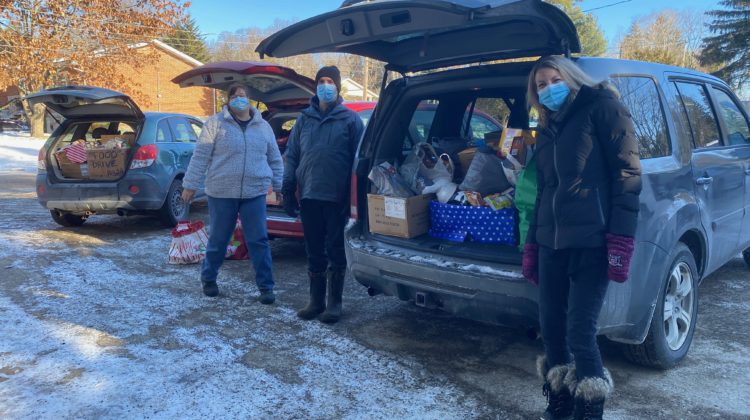 “Every year we challenge our school community to collect as food for the food bank,” grade 7 and 8 teacher Greg Tripp explains. He says the challenge was put out by his students to parents, teachers, other students and anyone else connected with Spruce Glen. The school started collecting the food on December 1st.

Mrs. Baker’s grade 6 and 7 class ended up donating the most food with just over 400 items.

“It’s absolutely overwhelming,” CEO of the Table Soup Kitchen Foundation Heather Cassie says. “We saw one vehicle pull up and then second and third pulled up. We were absolutely speechless.” She says it’s the largest single donation they’ve ever gotten from a school.

“It’s going to go such a long way,” Cassie says. Towards the end of December and into the new year is when she says donations start to dry up, so getting such a large amount now will allow them to continue serving their clients at the standard they’re used to.

The school has been doing this for over two decades. Tripp says they usually drop off around 800 items, but this year they gave the Foundation 1,785 items. “We didn’t even put any special challenge on it,” he says. He jokes that with so many items to drop off, it served as a good work out for the staff and volunteers dropping it all off.

“This is a year we need to put in some extra help for our community,” Tripp says.

If you want to drop off a donation at the Foundation, you can do so between noon and 3 PM on Tuesdays and Fridays or between 10 AM and 1 PM on Saturdays.