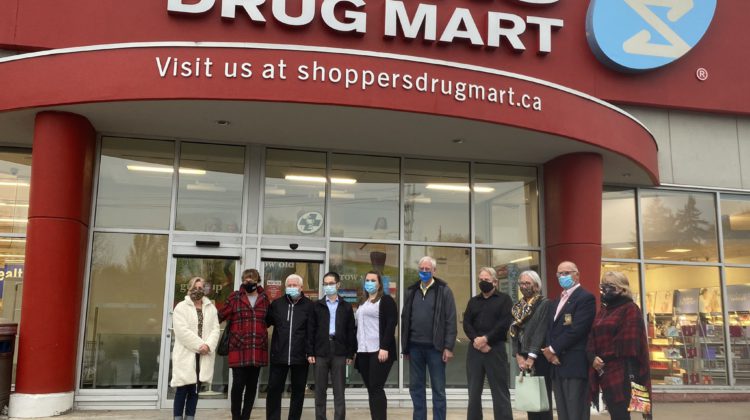 Earlier this year the provincial government announced some drug stores in Ontario would be used as testing centres. “Very shortly after that, I was getting calls from Mayor Paul Kelly that Gravenhurst should be the location for testing,” Parry Sound-Muskoka MPP Norm Miller said Thursday in front of the Shoppers. He added that the new owner of the store Simon Lu also played a critical role in bringing a testing centre to the area.

“For a long time, Gravenhurst has gotten the short end of the stick in terms of health care,” Mayor Paul Kelly said. For locals, they have either had to go to Bracebridge or Orillia to get tested. He said he was happy to be able to now have a testing centre in Gravenhurst.

Lu became the owner of the Shoppers just over a week ago and Kelly said right away Lu was eager to make it a testing centre.

The Mayor also acknowledged the work done by the Rotary Club of Gravenhurst in helping with the mobile testing centres.

If you’re asymptomatic, you can get a test starting today at the Shoppers Drug Mart at 511 Muskoka Road South in Gravenhurst. The Shoppers on King Williams Street in Huntsville is also available as a testing centre.