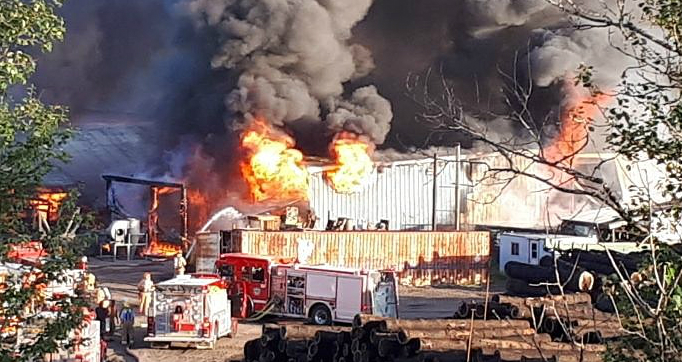 This photo of Muskoka Timber Mills was taken as the blaze was growing around 8:00pm Wednesday evening. Courtesy of YourTV.

BRACEBRIDGE, ON – A fire at the Muskoka Timber Mill at 2152 Manitoba Street has raged all night.

It was one of three fires on the day for the Bracebridge Fire Department. By 11:00pm last night Fire Chief Murray Medley had declared the fire “knocked down” according to CTV News-Barrie. But he added crews could be on site for days dealing with ‘hotspots’.

Up to 60 firefighters were brought into the scene, with nearby communities providing support as Gravenhurst and Muskoka Lakes Fire Departments provided crew and equipment to the massive effort

Around noon yesterday they were involved with a fire in a workshop on Fraserburg Road. Then  a call came in after 2:00pm for a structure fire at the former Bangor Lodge. The building that used to be the `clubhouse`was a total loss.

The business is an active timber mill providing thousands of board feet of fuel, making it a difficult fire that will require many more hours before it is finally out.

The call for the Muskoka Timber Mill blaze came in after 7:00pm and it was immediately evident this would be a big one.

With no ready water source all the department`s pump trucks were on scene shuttling water from a nearby hydrant.

The Mill was started in 1992 and according to its website, is owned by Ric Singor.

No word yet on injuries, cause or total amount of the loss.