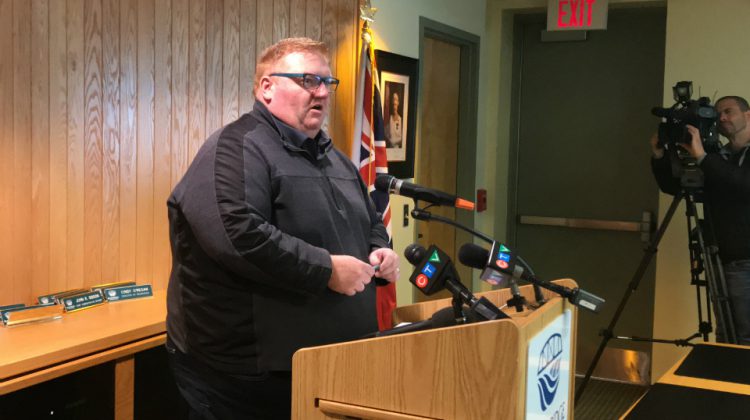 He revealed that Fairy Lake and Mary Lake have appeared to stop rising. But a forecast for as much as 50 mm of rain in the next day and a half has him troubled.

“I am very concerned about tomorrow because I don’t think we have an accurate model that tells us what 40 or 50 mm of rain will do to an already stressed watershed,” says Smith.

An area of concern for Smith is for residents along Beaumont Drive.

“Residents in existing flooded areas need to recognize that things could get a little bit worse before they get better,” Smith says. “I’m specifically thinking of those in the Beaumont Farm area and the mouth of the river where it joins Lake Muskoka could also see higher levels of flooding.”

Some residents in Bracebridge are staying behind to ride out the flood.

But they are few in number says Mayor Graydon Smith.

Smith reported that following a door-to-door canvass in the Springdale Shores area only a handful of people were choosing to stay in their homes.

“We were pleasantly surprised by the number of people who made the choice to leave on their own,” he says.

The emergency staging area at the Memorial Arena is no longer being staffed, says Smith. Only one person required assistance last night to find a place to sleep. He says if needs change they will start staffing the arena again.

He is also asking those directly affected by flooding past the closed portion of Beaumont Drive who are choosing to stay behind to call 211 and advise officials what they might need in terms of assistance. He reminds those affected people who rely on well water should not be drinking it at this time. A boil water advisory is in effect.

He says free water is available from the District water treatment plant at Kirby Beach and a filling station at 336 Ecclestone Drive.