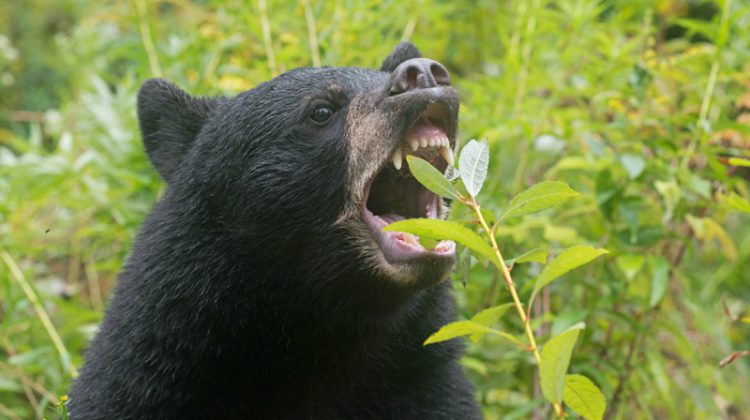 Photo of a black bear courtesy of Bear With Us.

With the summer-like weather here it’s a situation you could find yourself in, whether you’re at home or out camping. That situation is running into a bear.

Mike McIntosh is the founder and president of Bear With Us Sanctuary and Rehabilitation Centre. He says food is a bear’s primary motivator and it is the main reason they make visits to areas inhabited by humans, such as the one that was found dumpster diving in the Craighurst area a couple weekends ago. McIntosh says the problem is by the time leaves are fully in bloom and the grass has turned green, those things don’t taste as good to a bear anymore, so they start looking for other food:

McIntosh says birds don’t need the extra help from a feeder in the summer and that your garbage should be properly sealed. He says you also need to make sure your home is secured:

Taking preventative steps like that is the best way to avoid running into a bear:

He says even if you remove the things that attract bears to your property quickly, it may take a bit of time for them to go away:

McIntosh says if you do come across a bear it will likely be more afraid of you than you are of it. He says you should wave your arms and talk to it, saying things like “go away, bear!” to scare it off. If you’re out with your dog, you need to be extra careful:

McIntosh says if you’ve taken all the steps to make sure a bear doesn’t show up at your place, and one insists on returning to your property, you should report it to the MNRF’s Bear Wise program by calling 1-866-514-2327.