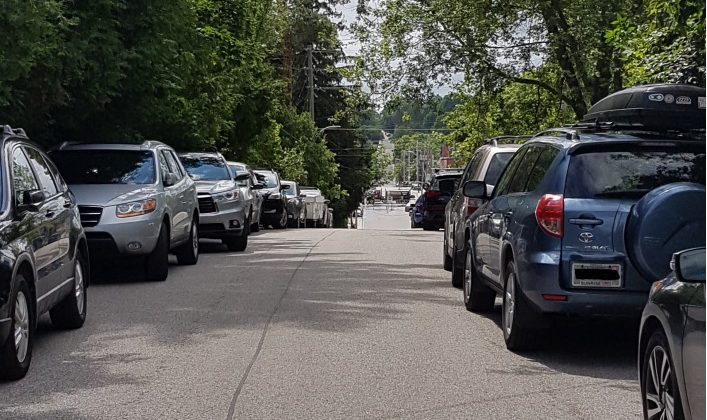 Photo: West Street North when cars are parked along both sides. Supplied by the Town of Huntsville.

Parking options in downtown Huntsville just got a little bit smaller. During Wednesday’s committee meeting, the town decided to put up no parking signs on the east side of West Street North, from Dara Howell Way to North Street.

This comes after residents in the area complained about people parking on both sides of the road, essentially putting it down one lane during the busy summer months. A report from town staff says the width of the road is between seven and seven-and-a-half metres, and its average daily traffic is between 50 and 199 cars. That means it falls into town’s category of parking on one side. Staff says another consideration was the ability of emergency vehicles to safely get through the street, as cars parking on both sides could impede that. The report says the no parking signs will allow firetrucks, police and EMS to get through safely all year round.

The cost to maintain the signs is around $50 a year.