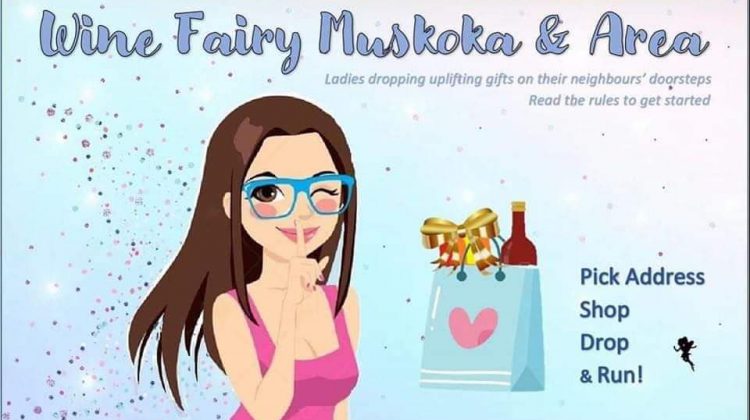 MUSKOKA, ON-The Wine Fairy program has made its way to cottage country, giving wine and treats to women across the region.

Kaila Pinsent, who brought the program to the area told MyMuskokaNow that after hearing about this and seeing a page for a Canada wide version, she wanted to bring a more localized edition of it to Muskoka and the surrounding area. “I noticed that there was not much to do with Muskoka in the whole Canadian wide one and I thought that I can make something like that happen here.”

Wine Fairy is a National movement which sees women support other women by anonymously dropping off wines and other treats. Pinsent said that the gift does not have to be wine and that it can range from anything like crossword puzzles, chocolate and even beauty products. “Nothing is off the list, as long as it is not illegal,” said Pinsent.

When women join their local Wine Fairy Facebook group, they put in their address and one of the other members goes out and purchases a couple of gifts and drops it off at the recipient’s door. Pinsent added that one critical part of the process is that it has to be anonymous.

She likened the experience to the game nicky-nicky-nine doors in which once the gift is dropped off, the person making the delivery must knock on the door then run before the person sees who gave the gift. ‘It is a lot of fun I have seen nonstop posts from people mentioning their delivery and talking about the rush they get from it,” said Pinsent.

Pinsent said that the program has just celebrated its first week and they already have 3,700 members in their private Facebook group who take part in making deliveries. Yesterday alone, Pinsent confirmed that over 200 deliveries were made.

Pinsent noted that her sister Kylie Scott has also been extremely helpful as she assisted in setting up the program in Muskoka and she primarily manages the Facebook page where all of the participants gather and exchange addresses.

Pinsent also said that especially during the COVID-19 outbreak and all of the stress that accompanies it, it’s important for women to support women. “I wanted to create a platform where it didn’t matter if women were younger or older, what your financial situation is or where you are in life, everyone deserves love.”


If you are interested in taking part and joining, visit the Wine Fairy Facebook group here or by searching “Wine Fairy Muskoka and Area *LADIES ONLY*.”