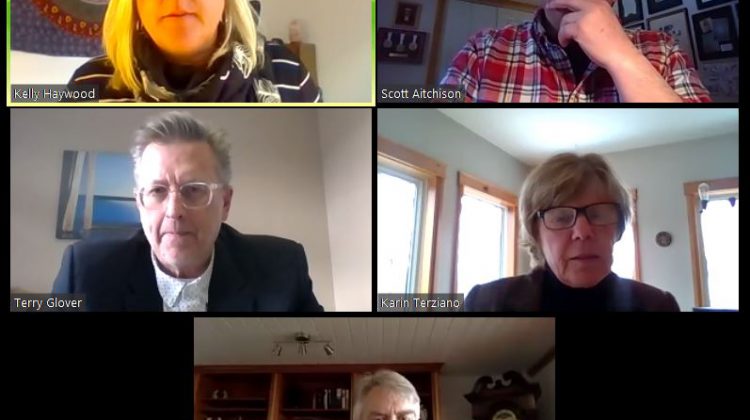 Local representatives from all branches of government met for a roundtable forum this week – to discuss concerns facing businesses in the district.

On Thursday, Member of Parliament for Parry Sound-Muskoka Scott Aitchison was joined by Member of Provincial Parliament Norm Miller, as well as Mayor of Huntsville Karin Terziano and Lake of Bays Mayor Terry Glover in an online meeting to hear questions and feedback from Huntsville area businesses who are feeling financial turmoil amid COVID-19.

This was the first of five meetings that will take place throughout Parry Sound-Muskoka.

In an interview with MyMuskokaNow, Aitchison said many of the concerns posed by participants revolved around how smaller businesses will survive this pandemic.

“There were a lot of good questions, some of which we weren’t entirely sure what the answer was so we’re committed to getting back to people. And then there were suggestions on how to improve some of the Federal programs that I’ve undertaken to try and lobby and see if we can affect those changes.”

Prime Minister Justin Trudeau announced Wednesday that the Federal Government will be relaxing the criteria for the Canada Emergency Business Account (CEBA) which provides qualifying businesses government-guaranteed loans of up to $40,000.

Aitchison says he was pleased with the CEBA decision – as it will lessen the strain on local business, but he’s still concerned it may not be enough.

“It’s the kind of thing that will certainly help our main streets and little towns. Of course, the Conservative party has also been pushing for a refund of the GST collected for the last 12 months because that would get money into the hands of these businesses right away as well.”

For MPP Norm Miller, many of the concerns that stuck out revolved around how businesses might be able to phase in – if the battle against the virus takes a turn for the better.

He notes there were questions regarding the clarity of certain amenities as well as what some of the current health rules and guidelines are.

“What programs there might be to help and when businesses might be able to open up. We have to start winning the health battle and I think we are making progress on that. We have to keep with the social and physical distancing and we will win this thing.”

Miller says ultimately they just want input from these businesses on how to survive until things open up again so that all branches of government can be on the same wavelength.

To watch the full meeting, you can head here.

Four more similar meetings will take place throughout Parry Sound-Muskoka, with the next one targeting businesses in Parry Sound, Carling, McDougall and Seguin.

That meeting takes place Monday at 6:30 p.m. and you can register here.