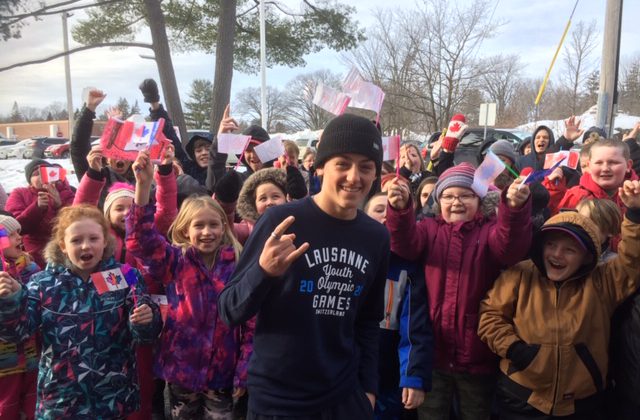 On January 24th, students at the Gravenhurst Public School, High school, teachers, friends, and government officials waited outside Brearleys high school to surprise him after he finished his exams.

Mother of the athlete Janis Brearley said that she was very surprised and happy to see the support towards her son, “I am very proud of him,” said Janis.

When Liam walked out of his high school he was greeted by students of the public school who waved Canadian flags and chanted his name as he said hello to the people who lined the walkway of the highschool and was congratulated by Gravenhurst Mayor Paul Kelly.

“I think it is appropriate that we call him a hero as he showed that if you work hard you will succeed and I can’t what but the town will honour him in some way,’ said Kelly.

Liam said he was surprised to see so many people cheering for him as he walked out of the school.

When asked how it felt to compete on an international level he said that he enjoyed the experience. “It was such a different experience altogether and it was super cool,” said Liam.

Liam said that tomorrow he is off to California for two weeks to train and compete in the World Cup, then he is heading to Calgary and then finally returning home for a while.

Liam represented Canada in the Youth Olympics in January and won three medals in three events including placing second in slopestyle snowboarding, winning third in the halfpipe event and coming in third again in big air. “I wasn’t anticipating getting up on the podium but it was such a cool experience.”