Event to make sure all Muskoka kids have gifts this Christmas 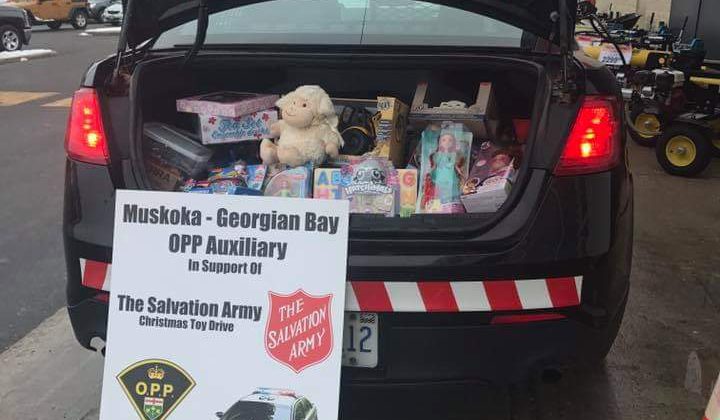 MUSKOKA, ON – It is one of the only times something getting jammed into the back of a police car is a good thing for everyone.

The Salvation Army and OPP are teaming up for the annual Stuff the Cruiser toy drive.

Muskoka OPP detachments are challenging the public to stuff its vehicles with toys for all ages and genders.

Auxillary Staff Sergeant Bobby Lebouthillier has been involved with Stuff a Cruiser for 10 years. He said this year the Salvation Army is putting a big emphasis on toys for boys and girls aged 12 to 18.

Aside from that and batteries, Lebouthillier said there is no set goal.

“Every year the Bracebridge and Gravenhurst communities always come through,” Lebouthillier said. “The generosity never ceases to amaze me. They just keep giving and giving and it never seems to end.”

The sergeant added winter clothing may not be as exciting as a toy, but those donations are just as important.

There will be three dropoff locations split between the towns tomorrow running from 10 a.m. and 2 p.m. Cruisers will set up at Walmart and Canadian Tire in Bracebridge while Canadian Tire will be the lone location in Gravenhurst.

The event is one Lebouthillier looks forward to the most each year.

“It’s positive, it’s upbeat and everybody is smiling,” Lebouthillier said. “It’s a different platform where we can engage with the public. We can have an open conversation that doesn’t necessarily have to be about a toy drive.”

Those who might not be in a position to donate can still help out. Lebouthillier said they can donate time instead, manning the Salvation Army kettles for an hour to help collect money.

For those worried about the police service tying up its resources at the drives, Lebouthillier said it won’t be an issue. The cruisers will be emptied often in case the vehicles are needed in an emergency.