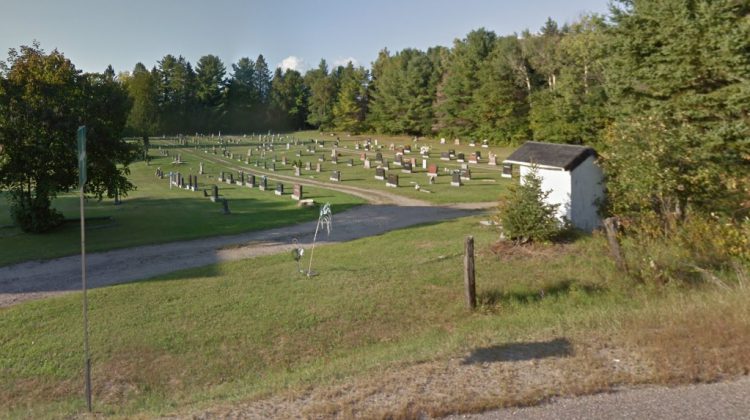 The cemetery at Maple Lake is shown on Google Streetview. Image sourced from Google.

ALGONQUIN HIGHLANDS, ON- Wanda Lawrenson doesn’t want anyone to get caught off guard when burying their loved ones in Algonquin Highlands.

Last week, Lawrenson sent a Letter to the Editor to the MyHaliburtonNow.com newsroom, detailing the concerns she had over the costs of a traditional burial for her father in the Maple Lake United Church graveyard plot this past August.

Lawrenson detailed her family’s history and ties to the area in the letter, with her grandfather Benjamin Sawyer serving as the first reeve for Stanhope.

Her mother had already been laid to rest in the family plot at the church back in 2014, and at the time, Lawrenson said it had cost $400 to open and close the grave. Both her parents firmly believed in a traditional casket burial, and that was the option taken for both by Lawrenson’s family.

This summer, however, costs had risen, which Lawrenson attributes to decisions made by the township government.

“We did pay a premium because we had Dad’s service on a Saturday and a long weekend. Therefore, for a Friday or Saturday it is $700.00 + tax. You can phone the Township office or view their website for all the breakdown of costs.”

The cost that she didn’t expect was a surcharge for the use of a mini-excavator, which is contracted out by the township.

“Monk’s Funeral Home called the Township to inquire on our behalf if this was a necessary cost,” wrote Lawrenson.

“The Township faxed a copy of the cemetery layout and of my parents’ plot only to be told that “yes” it was necessary. Accessibility to my parent’s plot is off the “pathway” and not readily accessible, therefore we would have to pay the surcharge. Other graveyards in the area in Townships like Minden Hills charge from $400 – $500 approximately with no surcharge. Accessibility to plots at these graveyards would be no different.”

Lawrenson wrote that she had spoken with Public Works operations manager Adam Thorn on the matter, looking for an explanation of the surcharge, but never got a clear answer.

“I want everyone to understand that at the time you go to the funeral home, this is not the time to hear costs that cannot be explained or justified,” wrote Lawrenson.

“Many families are overwhelmed by funeral expenses, but it is inevitable, and you will find a way to pay the funeral home any way you are able. Perhaps you have purchased a plot, or maybe you are going to have to make that purchase from Algonquin Highlands at the time of death as well. Another cost to incur.”

Overall, she wanted other people who may be planning burials in the township to be aware of the increased cost.

The MyHaliburtonNow.com newsroom reached out to Thorn for clarification on the cost increase.

“That takes staff from other projects they were working on,” said Thorn.

That change in method was the cause of the price jump. Thorn indicated that there are usually only two grave openings a year in the township, and it would be unlikely the excavator would be used  beyond those openings.

“If we did two a year, it doesn’t warrant spending close to $80,000 on a piece of equipment that we have to maintain annually, and would just sit there,” said Thorn.

“We might have other small uses for it, but it wouldn’t warrant the purchase of it.”

The price guide for burials in the township is available online.

As for any planned changes to the burial costs in the township, Thorn indicated that the price will not be going up or down. Everything should stay the same in 2020.

“The price is set,” said Thorn.

“We don’t make money on this by any means, it’s basically just a cost recovery, it’s all it is.”