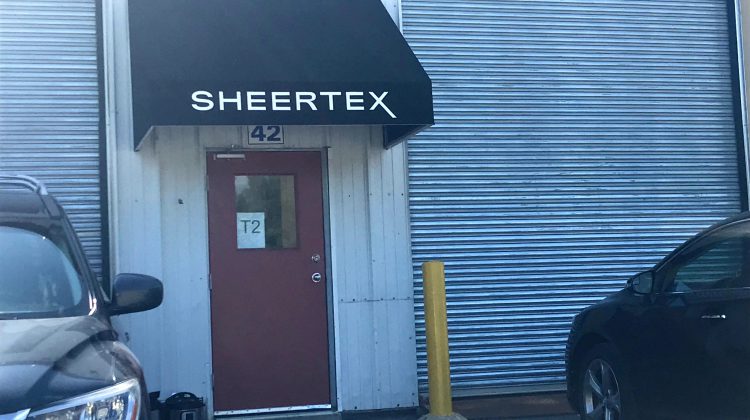 The exterior of the business, shown in September of 2019. Photo by Doug Crosse, MyMuskokaNow.com staff.

BRACEBRIDGE, ON- An award-winning Muskoka business is leaving the area.

Sheertex, formerly known as Sheerly Genius, will be closing up their Bracebridge operation and re-locating to Montreal. The process of moving is already underway.

The company recently took first place at the annual IMPACT awards in Bracebridge in April, along with $15,000 in grand prize money from the Muskoka Founders Circle. Their product is said to be the “world’s toughest pair of sheer pantyhose” with a tensile strength of 4000 to 6000.

At the time of the award, Bracebridge mayor Graydon Smith praised the company as an example of Muskoka’s entrepreneurial spirit.

The company had opened last September with two staff, growing to 16 employees by April.

“I am so thankful to the Muskoka community for its support since we opened our factory just under a year ago,” said company founder Katherine Homuth, in a statement to the MyMuskokaNow.com newsroom.

“The business has grown faster than we ever imagined and we have been struggling to keep up with production demand locally. The move to Montreal gives us access to the resources we need to continue to grow. It has not been an easy decision and while it’s the right thing to do for the business I am personally very sad to be leaving Muskoka.”

Jodi Hanrahan, the general manager of Aspire Muskoka and the company’s landlord thanked Homuth for her kind words towards Aspire.

“We wish Sheetex all the best in their next growth stage in Montreal,” said Hanrahan, in a written statement.

“We are sorry to see them leave!”

The MyMuskokaNow.com newsroom has asked Homuth how many jobs will be affected by the move to Montreal, and have not heard back as of the time of this report. We will update this report as the information becomes available.