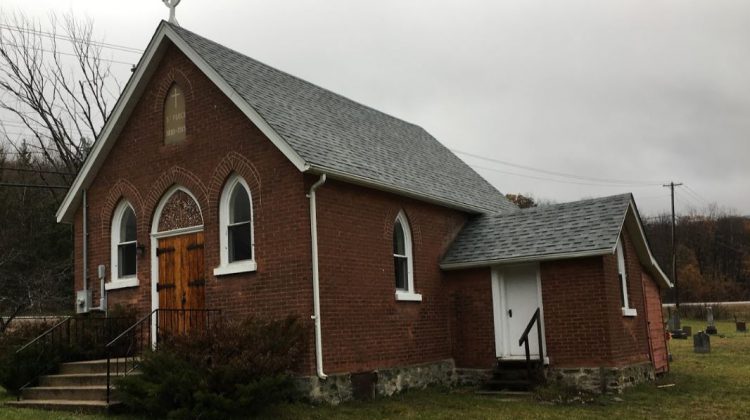 LAKE OF BAYS, ON – Old is meeting new as an online petition to save a 130-year old church clashes with the reality of the church’s situation.

St. Paul’s Anglican Church, Grassmere,  on Highway 60 in the Town of Lake of Bays is facing the modern reality of a shrinking congregation and an outdated building.

The wardens of the church, a core group of four in their 80s, have been dealing for the last two and a half years with the decision by the Anglican Diocese of Algoma to decommission the house of worship. The Anglican church is dealing with 800 churches across the country it no longer can afford or look after.

On Tuesday Warden Jacquie Howell made a presentation to the Township of Lake of Bays about what this will mean to the building and cemetery. Essentially not much can be done with the church building because it is surrounded by the cemetery, which upon handover to the town, will be maintained by Lake of Bays taxpayers.

“We would transfer the cemetery and the land with the encouragement of the diocese to the Township of Lake of Bays,” explained Howell. “There is a bereavement authority. The government has a lot of control on cemeteries and a lot of administration requirements on cemeteries.”

Approximately 250 people have signed a petition asking the Township of Lake of Bays to support keeping the building in some way.

The statement on Change.org where the petition is posted states in part, “We believe the Township of Lake of Bays should request input for other uses of the building and/or groups willing to repair and maintain to preserve the church building while adding no burden on the taxpayer.”

Rick Brooks is the councillor for Sinclair Ward where the church is located. He said the presentation to council drew a clear picture of the predicament the wardens were in and that the town had a responsibility to take on the care and maintenance of the still active cemetery.

“They felt it was now time to come to council and let us know as staff and council members what the situation was,” he said. “If the building stopped being an active church under the cemeteries act the township will be taking over the cemetery itself.”

Howell says she and the other congregants, which number about 20 each week during the 12 summer services that are held at the church, would love to keep the building and find other uses, but there are just too many impediments to making that happen. They include the fact that there is no water or septic service in the church building,  and it cannot be moved due to the construction which is wood frame with brick cladding.

“We don’t want an abandoned building boarded up and vandalized,” she explained. “That is not the kind of expression we wish to see of the church.”

Online the comments mainly skew towards the Township of Lake of Bays not trying hard enough to find solutions.

“It’s frigging sad that the township can’t ‘scrape up’ funds to maintain this wee building,” writes Debbie Cuttress Meredith on Facebook. “The costs can’t be that huge. I would love to see them do something meaningful with our tax dollars. Surely it can’t cost that much in the big picture. What happened to preserving history!”

Howell would like to see the building torn down and the idea is to have a plaque with a column built from the bricks supporting it, to show how the church looked and provide its history.