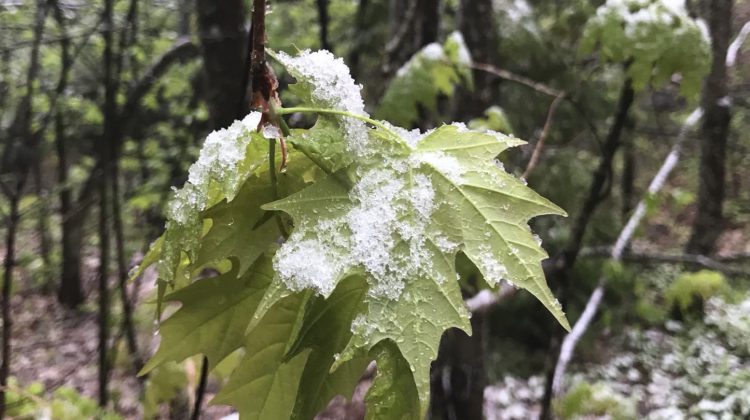 The summer snowfall was highlighted by the park’s Twitter account, which shared two images of leaves weighed down by the recent flurry.

According to Environment Canada meteorologist Crawford Luke, the appearance of snow in early June is unusual, but not unheard of. North Bay had had similar snowfall around the same time back in 2007 and 2008.

He said that anything still on the ground from this morning would likely be gone by the end of the day, with an approaching warm front bringing rain tomorrow.

After that warm front passes through, temperatures should go back to seasonal by the end of the week or even higher. Luke described the weather to come as a “dramatic improvement”.

As for today’s snow, he stated the only reports of flurries had come in from Algonquin Park. The park, according to Luke, had been the region’s “cold spot” which allowed snow to get mixed into showers earlier this morning.

Residents of Muskoka and the surrounding area won’t need to worry about any more snow.

“It happens every once in a while,” said Luke.

“Certainly unusual, but not 100 per cent unheard of.”