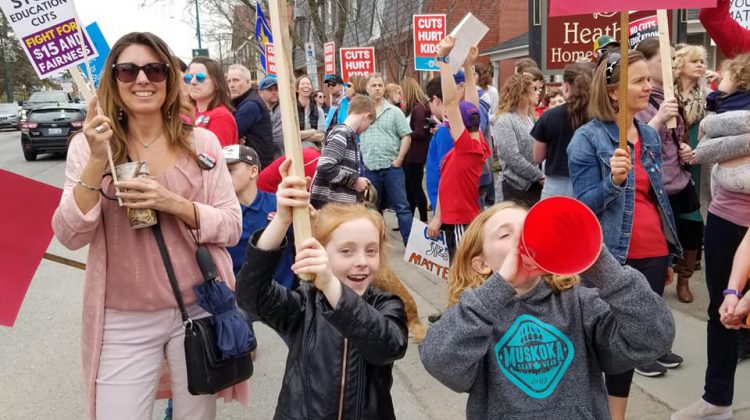 BRACEBRIDGE, ON – A group of like-minded protestors are hoping to band together to fight proposed provincial budget cuts.

Calling themselves the Muskoka Power of Many, they plan to collectively to put pressure on Parry Sound-Muskoka MPP Norm Miller.

Members include the Ontario Public Service Employees Union, the Lake Country Legal Clinic, PROMPT Muskoka – a local anti-poverty group and the 15 and Fairness Chapter of Muskoka.

The group says in a statement on Facebook that, “June 7th will mark the one-year anniversary since Doug Ford was elected. Provincial changes and budget cuts made since then impact Muskoka.”

A protest called Norm Miller: Resist the Cuts is being held at Miller’s office in Bracebridge on Saturday, June 8th.

Meghan MacDonald is a community legal worker with the Lake Country Legal Clinic. She said since the Conservatives have come into power the cuts have been fast and sweeping.

They have a list of hot button topics they are hoping will avoid the chopping block. Those include protesting cuts to local community clinics, education, healthcare, protections for workers, libraries, people with disabilities, and children with autism.

“We want to send a message to Norm Miller that we really need him in our corner,” said MacDonald.

“We need him to stand up for our community and for his constituents.”

She said that even things most people thought would be safe from cuts are no longer safe.

“They promised during the (election) campaign they wouldn’t cut the basic income pilot and they did,” she said.

“Legal clinics and legal aid were told specifically multiple times even since the election that there won’t be cuts, that we aren’t even on the radar.”

She said now there are 30 and 40 per cent cuts being introduced.

Even though Miller is typically not present for these protests, MacDonald said they want to show him and constituents that people are aware of what he is doing.

“It’s to let him know that we are watching and listening,” she said.

It is why they are holding the barbecue and information session to educate people about the effects of cuts in the local area.

People are slated to meet at the Lake Country Community Clinic, 8 Ontario Street in Bracebridge at 9:30am.

The march will proceed down to Miller’s office at 165 Manitoba Street and return.

At 11:00am there will be a free barbecue and information session at the clinic, including speakers detailing how government cuts are changing and affecting Muskoka.