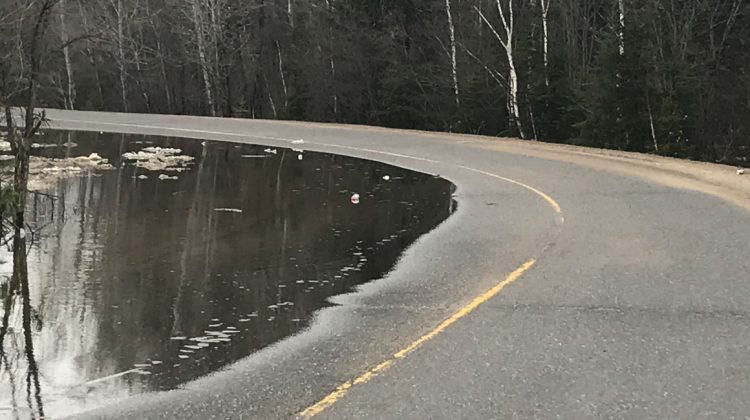 Flood levels in Huntsville could exceed what residents experienced in 2013.

Flooding is going to continue in the town of Huntsville for at least the next 72 hours.

Mayor Scott Aitchison met with the media at the Algonquin Theatre to confirm that levels would be at least as high the flood in 2013.

He also said water levels appear to have peaked along the Big East river but that a sustained flow rate will continue to cause flooding throughout the area and communities south of Huntsville.

All the logs have been removed from the Brunel Locks in an effort to reduce lake levels near the town.

Aitchison also advised low lying areas to the south of Huntsville need to prepare for higher water. Flooding in town is expected to continue.

Roads are closed to protect the public and it is illegal to drive on a closed road.

Huntsville’s Director of Operations and Fire Chief Steve Hernen told Your TV Muskoka earlier today that he expects that before the flooding is done it will be worse than what hit the town six years ago.

“If you had water in 2013 you’re going to see water this year,” Hernen said. “If you’ve got anything you need to secure on your property or tie down you need to take the precautions.”

Hernen is pointing to the warmer than expected nights that has allowed melting to take hold 24 hours per day.

“We’ve had a lot of snow in Algonquin Park, we have a lot of water content in the snow,” Hernen explains. “We’re seeing that snow melting and that water is entering the system.”

He goes on to say, “we’ve seen the peak flow but it has not dropped back down.”