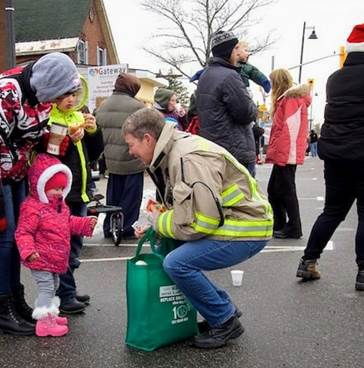 Santa is calling on Gravenhurst’s firefighters to sub in as his helpers this holiday season.
When the man in red makes his annual visit to the community, Gravenhurst Fire Department will be collecting toy donations on his behalf. You can help children in need in the community by bringing an unwrapped toy to the Santa Claus Parade on the 24th. Organizer Danielle Ryan says this will be the third year for the annual toy drive and every year it brings more success.

“All kids need to have a present under their tree on Christmas morning,” says Ryan. “So we’re helping the Santa and the Salvation Army by collecting new, unwrapped toys along the parade route.”

Ryan says the Salvation Army, with Santa’s approval, will be giving out the toys to local parents that could use some help bringing Christmas cheer to their kids this year.

If you can’t make the parade you can still make a donation by stopping by Ladies Night at Stedmans on November 15th or Gravenhurst Canadian Tire on November 17th.