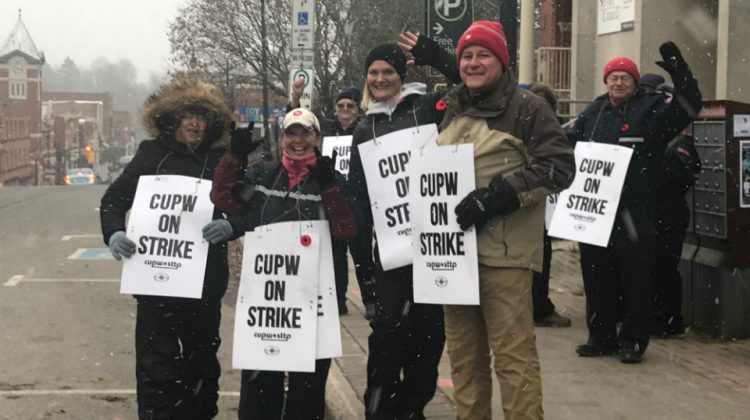 The rotating strikes at Canada Post have hit Bracebridge.

Local President Sharon Dodson says they will likely be only on strike for a 24 hour period, but only need to be picketing the location while it is open during business hours.

She says with the increase of parcel mail Canada Post has had a couple of good years but isn’t looking after its workers.

“We have a lot of parcels with Amazon, the Home Shopping Channel, and the marijuana,” she says. “Yes (Canada Post) is in good shape. They have had a couple of years of making money. Lots of it.”

The strike, she says, isn’t about pay so much as it is about benefits that have recently been modified or cut.

“This is not all to do with pay,” offered Dodson. “It’s to do with health and safety. We’re number one across Canada for (workplace related) injuries. And (Canada Post doesn’t) take care of us properly.”

She says things like short and long-term disability have been either changed or taken away from workers already receiving benefits.

“All of our workers that are out sick and having operations and long-term (disability) from injuries at work, they cut off their pay,” Dodson claims.

She says the reaction from the public is mixed, but the few minutes MyMuskokaNow.com spent talking with Dodson, there was a steady parade of honks in support of the strike.

“It’s a mixed reaction from the town, but most of the people are waving and honking horns,” says Dodson.