Huntsville OPP is looking for some public help finding a suspect in a theft investigation.

Police say, on Monday night a masked man entered a business on Highway 60, demanded cash and then took off around the back of the building after the clerk handed it over. Officers called in a K-9 Unit to search for the suspect, but believe he escaped in a vehicle.

The suspect is between five foot eight and five foot 10 and had dark eyes. He was wearing a balaclava, a black hoodie, black gloves, dark blue pants and construction boots.

Police are asking anyone with information to call your local OPP detachment or to leave an anonymous tip with Crime Stoppers. 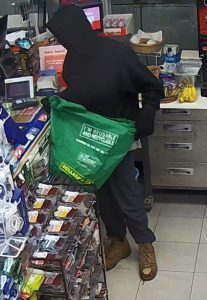