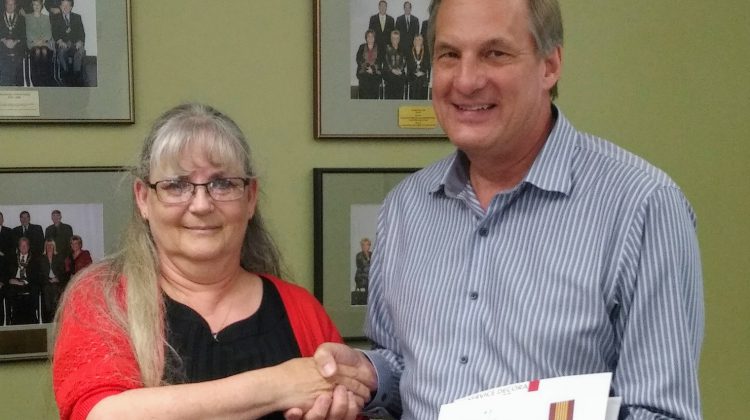 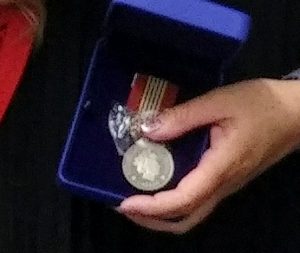 A member of the Gravenhurst Legion has been recognized with a national volunteering award.

Pamela Davidson received the Sovereign’s Medal for Volunteers Award for her work with the Gravenhurst Royal Canadian Legion. The medal has replaced the Governor General’s Caring Canadian Award which honours volunteers from all facets of society.

In presenting the award to Davidson at a Gravenhurst Town Council meeting, Deputy Mayor Randy Jorgensen said, “We are very fortunate to have so many dedicated volunteers in our community like Pamela. It’s great to be able to show our appreciation on behalf of the community and we’re thrilled that a representative from Gravenhurst is being recognized nationally.”

Davidson told the MyMuskokaNow newsroom that she is a very private and shy person so when she got the news about the medal, she kept it to herself. “I really didn’t tell anybody I was receiving it,” she explains. “Because that is not the reason why I volunteer.”

The silver medallion is going to take a place of pride on her Royal Canadian Legion uniform. “I’ll be wearing it on my Legion uniform and I will wear it proudly,” Davidson says. “And that will be about the only place I do wear it.”

Davidson was nominated for the award by the Royal Canadian Legion District E Deputy Commander Crystal Cook along with her husband, Jim Davidson. She’s been volunteering at the Legion now for 20 years, including fundraising and activities supporting Branch 302.

The award goes to a Canadian citizen who has made a significant, sustained contribution to the community in an unpaid capacity.