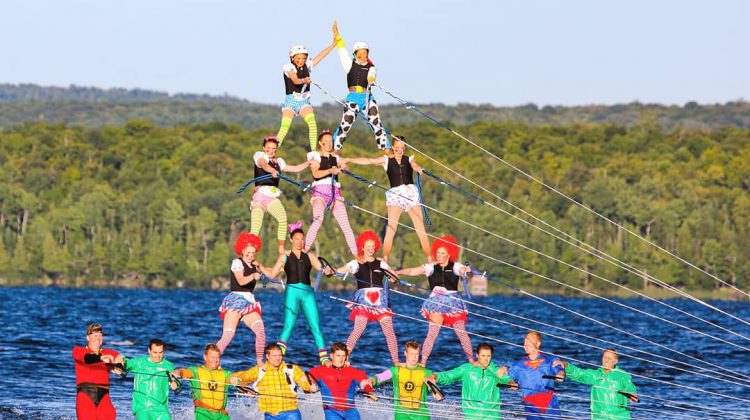 Team Australia used the theme of Toy Story for their one hour show on Saturday. (Colin Watson Photo)

The first day of the World Water Ski Show Tournament came with great weather and huge crowds at Deerhurst Resort in Huntsville.

Despite heavy winds earlier in the day affecting the USA and Canada, fans numbering in the thousands whooped appreciatively as the teams from China and Australia put on great displays in calmer conditions.

Australia, featuring a theme of Toy Story, put on a one hour show that featured multiple skiers looping over and under each other off ramps, an impressive eight-person pyramid launched off a dock and a flowing, joke-filled story throughout.

“It was a great first day,” said tournament chair Will Bazeley. “The crowds were amazing and once the wind died down it made things easier for the competitors.”

Day two of the event continues Sunday with a decent forecast for the first part of the day before showers are scheduled in the early evening.

Tickets are still available at the gate. Just a note that there is a parking lot east of the resort on Highway 60 with a shuttle running guests to the event site. For more information go to the event website by clicking here.