Two businesses in Bracebridge and Gravenhurst are being lent a hand in their multi-million dollar expansion projects.

Vic Fedeli, Minister of Economic Development, Job Creation and Trade, announced over $840,000 in funding will be split between the two companies and will help create 18 new jobs.

Icarus Aero in Gravenhurst operates out of the Muskoka Airport. They provide mission-specific and highly-customized engineering, certification, and manufacturing solutions for rotary and fixed-wing aircraft with clients in the medical, rescue, military, policing, and firefighting sectors. Owner Ryan Hader says they already have clients in the United States, Europe, and the Middle East.

The company is getting $480,000. Hader says they’re expanding by building a 9,000 square foot building as part of a $3.2 million project. It will create eight jobs and allow them to expand into new markets outside of Canada. Hader says they also hope to expand their relationships with schools by bringing in co-op students.

The design process is already underway for the new office with a groundbreaking tentatively slated for March. Some of the equipment has already been brought in, with Hader and Fideli demonstrating one of the new pieces of machinery.

“Manufacturing and design in aviation is something that is largely lacking worldwide, and more so in Canada,” Hader says. While it has started to improve recently, the industry has been on the decline for the past decade. “The niche specialty we offer has a place to support the aviation industry,” he goes on to say. 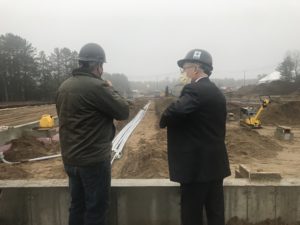 Being that they’re located on the grounds of the Muskoka Airport, Hader says their impending expansion will be a boost to the airport as well. He notes how some of their clients come directly to them.

Another ten jobs are being created at Bracebridge’s Embertech Industrial. The province is cutting a cheque worth $362,897 for the company.

Embertech is investing nearly $2.7 million to upgrade and expand its Bracebridge-based facility. That includes installing three-phase power, which will help increase productivity and production capacity.

The company will also move forward with the commercialization of a new hydroelectric microturbine. Five major suppliers are also expected to benefit.

“Embertech’s diversity of projects and customers provides an exciting workplace for people to explore and develop themselves in the skilled trades,” said Tanya Neal, Embertech’s General Manager. “Our experience and specialization in clean energy development and maintenance, coupled with the right facility and tools, will greatly contribute and support important global environmental goals.”

Ontario is investing more than $100 million through the regional development program from 2019 to 2023 to support distinct regional priorities and challenges. The program provides cost-shared funding to businesses, municipalities, and economic development organizations to help local communities attract investment, diversify their economies, and create jobs.