Hydro One CEO outlines ambitious five-year plan; what you pay will decrease 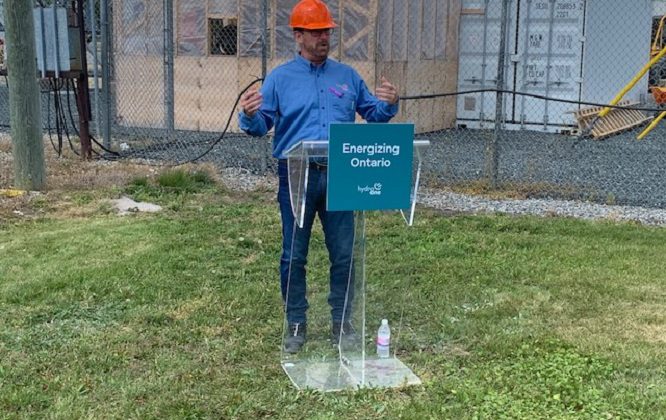 Mark Poweska, Hydro One president and CEO, takes the wraps off a $17-billion, five-year upgrade plan. It's been sent to the Ontario Energy Board for approval. (Photo taken by Bob McIntyre, Vista Radio staff)

Hydro One is asking the Ontario Energy Board to approve a five-year, $17-billion investment plan to upgrade the electrical system across the province.

In Timmins on Tuesday, president and CEO Mark Poweska outlined the plan to deal with an aging system, climate change and the challenging economy.

“The results of the application will be the improvement of our reliability on the distribution side by 25%,” he explained, “and building a grid for the future which will support economic growth and modernize the grid.”

Poweska says most of Hydro One’s existing equipment was built in the World War II era.

The project itself will support businesses and jobs.

“And we will be using local suppliers and businesses and indigenous businesses as much as possible to complete this work,” Poweska added.

It will also result in your hydro rate going down in 2023, and increase by less than the inflation rate in the next four years.