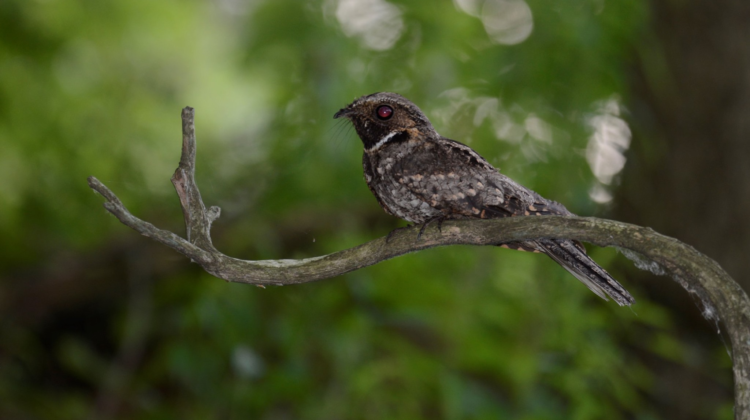 The threatened eastern whip-poor-will (Photo credit: Levi Turnbull, supplied by The Land Between)

Conservation group The Land Between is installing three new tracking towers to monitor at-risk species across cottage country. The towers are the first of many to be installed by the organization in an effort to create a monitoring “fence” across a 180-kilometre blind spot south of Algonquin Park.

The towers will be installed in Haliburton Forest, Kawartha Highlands Provincial Park, and Tory Hill, and are part of the Motus Wildlife Tracking System, which uses radio waves to continuously monitor animals across North America, South America, Europe, and Australia. Wildlife such as birds, bats, or wolves are captured, tagged with a small radio transmitter, and released back into the wild.

Yellow indicates existing towers and their range, with red showing potential paths for the monitoring “fence.” (Photo supplied by The Land Between)

The Land Between’s current focus is on nightjars, a family of medium-sized nocturnal birds, according to Xavier Tuson, a bird conservation technologist with the organization. Only two species of nightjar are found in Ontario, according to the Ministry of Northern Development, Mines, Natural Resources and Forestry: the whip-poor-will, which is classified as threatened, and the common nighthawk.

For most birds, conservationists can track them by listening for their calls or observing their flight during the day. According to Tuson, nightjars are hard to monitor by human observers because they are typically only active at night, dawn, and dusk.

While The Land Between is simply helping to install the tracking towers for now, the organization might soon begin their own monitoring programs. Tuson says that monitoring is the first step in keeping vital habitats from being bulldozed or clear-cut.

According to Tuson, the Motus towers can cost more than $10,000 apiece, averaging between $4,000 and $6,000, but can be used for decades with very little upkeep by all kinds of wildlife-focused organizations. With the large scope of the project, Tuson says the organization is always looking for funding.

Tuson says all three towers should hopefully be operational within the next few weeks, with another being considered for Indian Point Provincial Park.