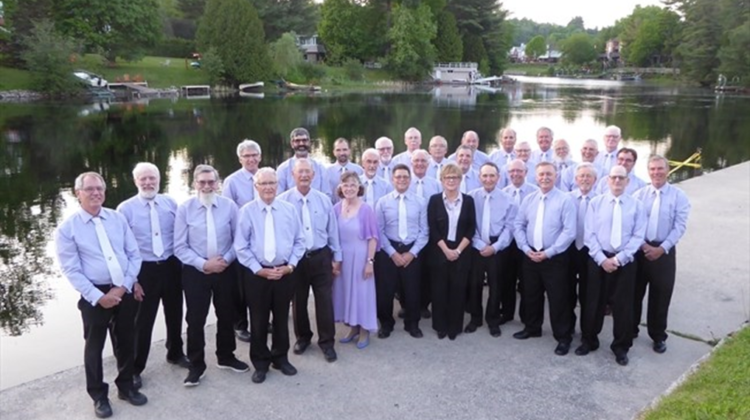 The Muskoka Men of Song (Photo supplied by Ken Veitch)

The Muskoka Men of Song have chosen this year’s recipients of its music education bursary.

This year, the bursary is $3,150, compared to last year’s $7,500, because the COVID-19 pandemic has hampered the group’s ability to fundraise through concerts. According to chairman of the group’s bursary committee Ken Veitch, the money is split between each of the recipients based on a number of factors, such as financial need and how likely they are to pursue a career in music. This year’s recipients are:

Even though the pandemic has put a pause on the concerts, Veitch says that hasn’t stopped the bursary program, “To date we have given out about $65,000 I believe, in music tuition fees to young people, all across Muskoka,” says Veitch. “Up to the pandemic, we had probably 10 to 12 students every year we helped. This past year, we still had a little money, we only helped seven students.”

Named after the program’s founder, the Sean Kelly Memorial Bursary has been given each year since 2001 to musically-gifted students under 18 to help them pursue careers in music.

Veitch says the bursary started when Sean Kelly discovered a musically-talented youth named Ryan Jackson who was having trouble paying his tuition fees.

“Sean went to the guys and said ‘are you interested in helping this young man,’ and they had a little money, so they did,” says Veitch. “That support continued for several years, and that Ryan Jackson is now the organist and choir director for the Fifth Avenue Presbyterian Church in New York City.”

Veitch says the Muskoka Men of Song are looking forward to performing with the recipients once concerts are allowed.