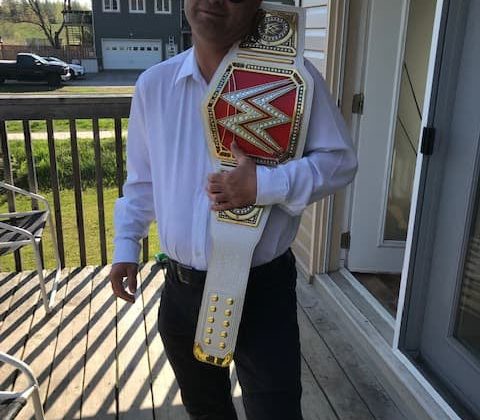 It’s a familiar sight for anyone that’s spent even a few minutes in downtown Bracebridge: Joey Middlebrook with his tinted Ray-ban sunglasses and white button-up dress shirt on strutting down the street with his signature professional wrestling championship on his shoulder. Now, thanks to an anonymous donor, he’s added a fourth title to his arsenal.

“Whether they know him directly or indirectly, everybody knows somebody that knows him,” the anonymous donor says of Middlebrook. The title was handed over to him last week and she says he was dancing with joy as soon as he saw it.

“I was really happy,” Middlebrook tells the MyMuskokaNow.com newsroom. He says that he’s a huge wrestling fan so now having a fourth title to carry around town is awesome. “I want to thank everybody,” he adds. “I love you all.”

“When we heard he was wanting another belt I instantly bought it for him,” she says. “We are living in such stressful times, with so many terrible things going on in this world. I thought if he could just do something to brighten someone’s day then why not do it?”

A picture of Middlebrook with the new title was posted on our Facebook page and quickly gained traction with hundreds of people commenting about how happy it made them to see him smiling. “Thank you Joey for always bringing a moment of joy to me and I’m sure so many others as you ‘swagger’ through town,” Delena Jennings wrote. “I’m not sure you know how you just being you makes our town so much richer.”

Middlebrook says he was surprised to see so many people like and comment on the post. “I didn’t know that there were a lot of people that liked me,” he says.

A wrestling championship can cost anywhere from a few hundred dollars to over $1,000 depending on what you’re buying. The anonymous donor says she wasn’t worried about that when buying it. “Honestly money is not the be-all and end-all,” she says, adding she did this because she knew the community would support her because of how loved Middlebrook is in the community. Soon after buying the title, five people e-transferred her some money to help cover the cost.

She says that she doesn’t have a special connection with Middlebrook. She just sees him walking down the street like everyone else does and wants to put a smile on his face since he brings so much joy to people in the community.

“You can’t help but smile when you see Joey,” she goes on to say. “He’s always happy and carefree. More people need to be like him.”