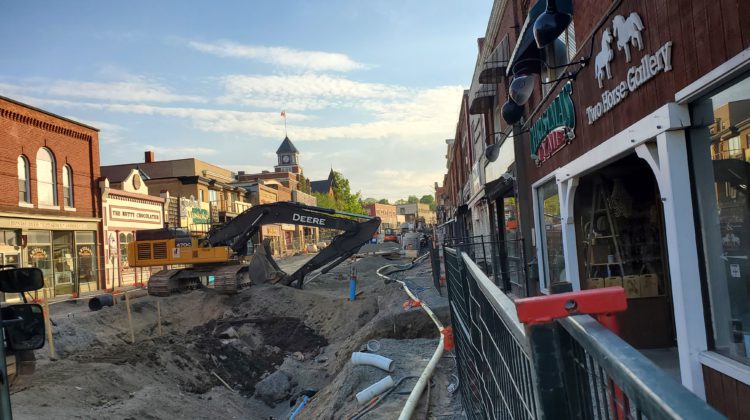 The downtown construction in Stage One (Photo: Martin Halek)

Huntsville’s Diggin’ Downtown project is set to enter its second stage by the second week of June.

The first stage of the project was originally scheduled to finish by the end of May, but was extended because of historic building foundations, according to District of Muskoka Director of Transportation and Engineering Mark Misko.

“A lot of these buildings are very old, to say the least, and they’ve got some interesting foundations that we had to work with,” says Misko. “That’s some of the reason we’re seeing a bit of a slower amount of progress through this area, but everything else looks to be on track and on budget for the schedule.”

Misko says that the contractor on the project, Dufferin Construction, has been working with businesses along the dig site to make sure they’re able to operate properly.

“We certainly don’t want to disrupt anyone’s business in a year that’s already been very challenging and we’ve made some pretty good efforts to support their continuity through this,” Misko says. “We’re doing things such as keeping pedestrian access open and accessible.”

The project involves replacing the aging underground water and sewage system, as well as resurfacing Main Street. Stage one of the project closed Main St. from the Muskoka River Swing Bridge, which has been resurfaced, to Brunel Street. 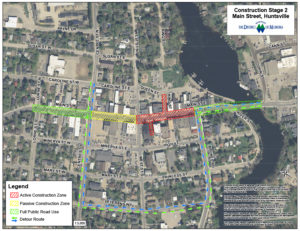 Photo from the Town of Huntsville

In stage two, the River Swing Bridge will reopen to vehicle and pedestrian traffic. Main Street will be closed from Brunel Street to Centre Street, and King Street will also be closed.

The District will hold a public information session on June 2 via Zoom.