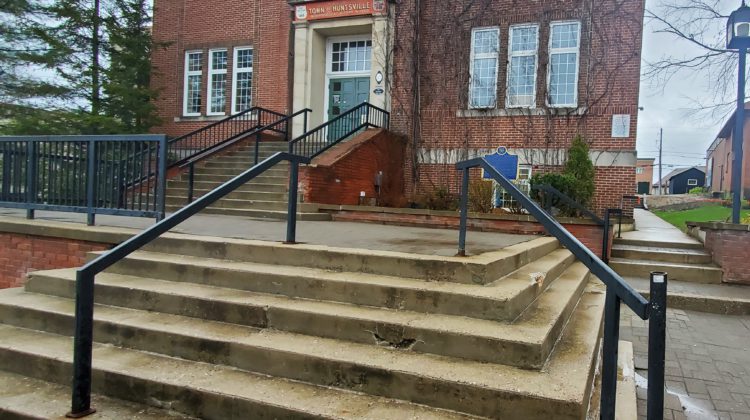 The Town of Huntsville will repair the damaged front steps of its Town Hall later this year.

Worn down by weather and foot traffic for close to 40 years, the steps have begun to crumble and the flanking brickwork looks no better.

“Our initial report said that the state they were in, they needed replacement as opposed to repair,” says Huntsville Mayor Karin Terziano.

“We also looked at whether we wanted to replace them like-for-like as they are, [or] putting the stairs inside the building and doing something different on the front.”

As it stands, structural integrity under the steps will need to be looked at before any decisions can be made.

If a rebuild is required, Terziano says the direction of the stairs will be changed to accommodate a new pathway between the Town Hall and Trinity United Church. However, the appearance will stay mostly the same.

“If we go with the full replacement, it’ll be a bit of a more modern finish but keeping with the heritage brick.”

According to Terziano, construction on the steps will hopefully be completed by the end of fall, along with the downtown water and sewage replacement project.

She says town council will likely meet in June to discuss potential designs and costs for the project.