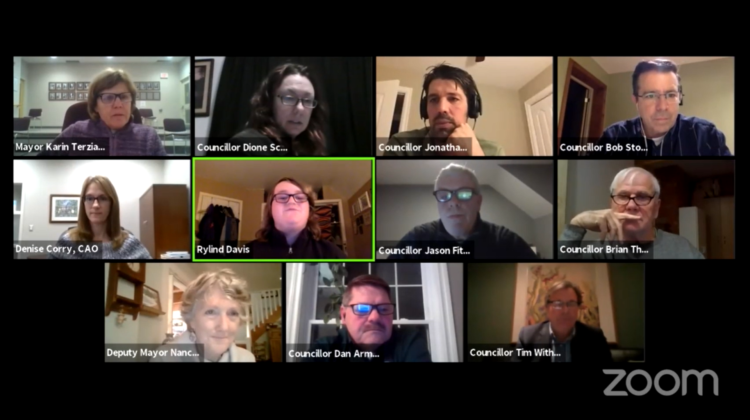 Mayor Karin Terziano told the My Muskoka Now newsroom over 1,200 masks were sold and the town is donating $2 out its $12 price, per mask to Mind Aid.

Terziano said they still have them for sale and will continue to sell them with part of the proceeds going to Mind Aid.

As for what went into choosing the charity, the Mayor said it all came back to the young fellow who presented the initiative to council about six months ago.

Sixteen-year-old Rylind Davis went to council in November of last year and asked about making town-branded masks available to the public  and making some kind of a donation from it to a youth mental health group.

Rylind told the My Muskoka Now Newsroom what motivated him to stand before the town council and pitch his idea was first a little jealousy of Deputy Premier Christine Elliot.

He said after seeing Elliot with a Huntsville Mask during an announcement, he brought up the idea with a friend.

Rylind focused on a youth mental health group because he says this pandemic has taken a real toll, especially on people his age, teenagers in high school who are not able to see their friends.

He said with his friends’ support, he emailed the Deputy Mayor, got a callback and was told she absolutely loved the idea and asked him to speak to the council.

Rylind then pitched the idea and received unanimous support from all nine counsellors.

He says he chose Mind Aid because of its road-map style approach to offering catered mental health resources in the Muskoka region.

And it doesn’t stop in Huntsville, as Rylind has taken it upon himself to reach out to Bracebridge’s Mayor with a similar proposal.

He said Bracebridge is indeed embarking on a similar initiative with the same organization, Mind Aid, with the logistics still being ironed out.

Rylind said Mind Aid is trying to make this a Muskoka movement involving all six municipalities.

And in case you were wondering, he added that a mask for the District of Muskoka with all six municipality logos is indeed in the works.